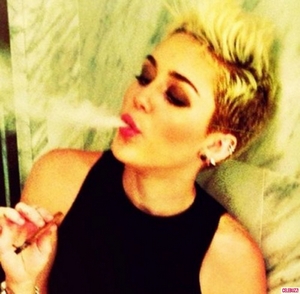 Yes, Miley Cyrus. That sledge hammer-licking slut. Did you see her on the VMA’s with that foam finger? And then riding that big wrecking ball wearing nothing? Let’s all wag our fingers, shield the children from all the spectacle, position ourselves as self-righteous and above it all….and then watch her latest video 4 times in a row once the kiddos go to bed.

It may be just as disappointing that Miley forever ruined the cool factor of drug references in songs with her recent single “We Can’t Stop.” And though we all may want to act shocked at what little Hannah Montana has turned into, putting drug references in your songs is just about the most conformist thing an artist can possibly do in 2013—country music included.

Though Sinead O’Connor had some brilliant points in her primary open letter to Miley Cyrus, as we saw later with subsequent Sinead letters, brilliant points or not, Sinead could nearly match Miley blow for shave-headed blow when it came to the crazy department.

Somewhere within the numerous and ever-present melees that have surrounded what is right now the most popular and influential artist in American music is that Miley Cyrus is a woman, and artist, and a daughter. No, I have no desire to leave my take on the multiple threads of whether Miley is exploiting or empowering herself as a woman with her recent antics. Even broaching the subject just lends to Miley and her marketing team’s underlying goal, which is to keep her name in the headlines and her singles high on the charts.

What I found interesting is when her father Billy Ray Cyrus recently opened up to Arsenio Hall about his daughters recent antics, he said, “Miley is very smart. She’s thought this thing out in advance of where she was going and, again, going back to her heart and her roots of the music and doing it because that’s who she is. She grew up around the greats. Waylon Jennings, Carl Perkins, Johnny Cash.“

Really? Miley Cyrus grew up on Waylon and Cash? Even regular CMT pop country pom pom waver Alison Bonaguro called foul on such a crazy assertion. After all, Johnny Cash and Waylon Jennings would never reference cocaine in their songs, would they? In Miley’s song “We Can’t Stop,” she says things like, “We run things, things don’t run we. We don’t take nothing from nobody,” and “It’s my mouth I can say what I want to.” Sure, the times change, and so does the nomenclature and context. But maybe there was a little more Waylon and Cash in there than we were willing to believe.

Miley hosted Saturday Night Live over the weekend, and while half the earth was waiting to see if the foam finger would re-appear, and the other half was manning the Miley Cyrus rehab watch, she tripped everyone up by coming out and performing two distinctly live, stripped down, heartfelt performances with no electronic accoutrements. Yes, Miley Cyrus can actually sing quite well; singing is supposed to be the point of all of this. Right at the apex of when the world was rooting against her to fail as washed up at 20-years-old with nothing but shock to create attention for herself and no substance or talent behind her music, she proved that somewhere deep inside her was a nugget of forte that was dramatically underestimated. Check mate. 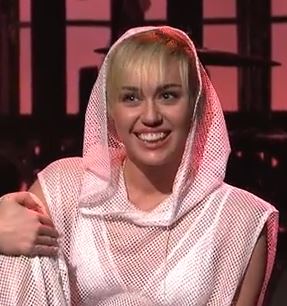 At the end of the second song Miley performed on SNL—the drug-laced and defiant “We Can’t Stop,” accompanied only by acoustic guitars—Miley showed one brief moment of sincerity when the crowd erupted with applause. She was truly shocked and grateful, showing a wide, unguarded, bright-eyed smile that harkened back to her innocent Hannah Montana days—a character she ironically ceremoniously killed off during the same SNL episode. It still amazes me why stars don’t go to the stripped-down performance more often. It certainly gives them the ability to deliver a more memorable moment than some of the big stage productions.

Another performer who regularly calls on shock to draw attention is Marlyn Manson. In his take on Patti Smith’s 1978 song “Rock ‘n Roll Nigger,” he adds the line, “Cause I am the all-American antichrist. I was raised in America, and America hates me for what I am. I am your shit.”

As much as we may like to shame Miley Cyrus, or Billy Ray Cyrus for raising such a monster, or Disney for manufacturing such a pop monstrosity, the simple fact is Miley Cyrus is a product of who we are. She is a child of the American culture. For better or for worse. From her embarrassments to her virtues. She was raised on Waylon and Cash, by the guy who sang “Achy Breaky Heart,” starring in a show from Disney. It’s never smart to underestimate anyone—financially or artistically. At the time that Miley seemed to be unraveling right before our very eyes, she was the most in control. I wonder if Waylon Jennings and Johnny Cash had similar moments in their careers?

Sometimes you can find wisdom and beauty in the strangest places.