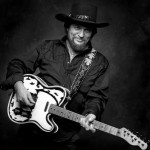 The first thing this album does is remind you that Waylon Jennings left us too early. The strength of the compositions validate that sentiment. All artists go though peaks and valleys in their careers, but passing away at 64, Waylon was never afforded the legacy era that his fellow Highwaymen have enjoyed; the “Golden Years” of an iconic country career.

Goin’ Down Rockin’: The Last Recordings is a very unique project, and should be approached as such. Not the mish mash of ill-fitting songs that are sometimes swept together to make a posthumous release, though not necessarily an album that was fully completed stem to stern and then locked away in a time capsule to be released later. It started when Waylon called up his long-time collaborator Robby Turner, and told him he wanted to lay down some tracks, just him and his acoustic guitar, with Robby playing bass. They were recorded to multi-track, so that the masters could be called upon in the future to add additional instruments.

Waylon’s estate was very careful after his death to not exploit the moment, and let the time come to them when things like unreleased recordings and tribute albums should see the light of day. As Robby Turner says in the Goin’ Down Rockin’ EPK (see below), he took a similar approach to this project, waiting until his heart told him it was right to finish these songs, as was Waylon’s wish.

Waylon wrote all the songs on the album except one, which is somewhat unique in its own right. Though Waylon wrote many of his biggest and most important songs, he would not necessarily be labeled as prolific. But Goin Down Rockin’ was where Waylon was at this moment in his life, sensing the end was nearer than farther, and mere footsteps from the failing health that would make him unable to pursue music any further. Waylon’s mortality feels like a thread that runs along the spine of many of these songs, adding a tingling, reverent weight and depth.

Waylon’s guitar player Reggie Young, and Waylon’s right hand man for years, drummer Ritchie Albright were called upon to put flesh on the Goin’ Down Rockin’ recordings with Robby Turner. Tony Joe White also appears, and is responsible for the title track. But make no mistake, this album is Robby Turner’s baby, and you can sense that throughout the recording; the care and reverence with which he approached the task.

I did his last 9 albums before this one. And when me and Reggie would work in the studio with him, he never told us what to do. We would play until we saw him smile. So that was our thing and that’s what I told Reggie. I want us to do this record, and I want us to play until we see him smile.

You can’t come to this album expecting to find some brand new Waylon super-hits that will help you relive the experience of your first time hearing legendary Waylon albums like This Time or Honky Tonk Heroes. Let’s be real, the end of Waylon’s career was not his peak of creativity and influence. But I’ll be damned if I was not surprised by the strength of many of Goin’ Down Rockin‘s offerings. 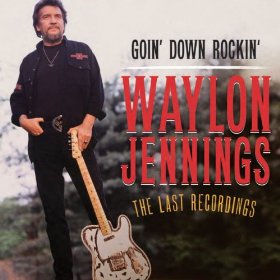 “Belle Of The Ball” was the only song on 1977’s Ol’ Waylon that Jennings wrote himself, and though my ear tends to steer away from remakes, this one captures the same sublime warmth of mind as the original, helped along by the confidence of Waylon’s voice, and Robby Turner’s idyllic steel guitar. But I’m not sure how you can do this song wrong; it is written so well. Waylon’s son Shooter’s take on the first The Music Inside Waylon Tribute is the gem of those releases.

The other superlative of Goin Down Rockin’ is the previously-unreleased “I Do Believe”; a thesis on Waylon’s religious theology that holds such grace, wisdom, and beauty, without coming across as too weighty or judgmentally wrong-minded. It really is a master stroke of the pen. I can see why Waylon was so eager to get these songs out to the world.

Despite the “Rockin'” title, there’s some waltzing and melody in this album, including “Sad Songs And Waltzes” which is not a cover of the old Willie Nelson tune, but Waylon’s similar, sister-take on the song. And the album ends with a fiddle-driven, Cajun-flavored waltz “Wrong Road To Nashville”.

The production of this album is one of its most present aspects. In places it is very heavy-handed, and very progressive. As a whole, I feel that Waylon would likely have smiled upon the approach, and it fits within the era from which these songs came. But in that same respect, in certain places it feels outmoded to the modern ear, like with the 80’s-ish feeling “If My Harley Was Runnin'” or some of the bass work on “Friends In California”, or the way the drums in certain places have that over-echo saturation.

But in most of Goin Down Rockin’, composition and production feels pretty seamless. Probably the most talked-about approach will be on the epically-produced “Ways of the World” which starts off just Waylon and his guitar, but then is bolstered by floaty, synth-sounding guitar layers and backwards-looped steel. I wouldn’t argue with someone who said it was too much, but I kind of like it.

Enjoying this album I believe depends greatly on how you approach it. Understand that this album isn’t just from Waylon, it is about Waylon; a celebration of his life through his own music, brought to fruition by the reunification of his friends. It is a tribute, and a truly original final offering all the same; a period at the end of his epic career.

It is worth your ear.