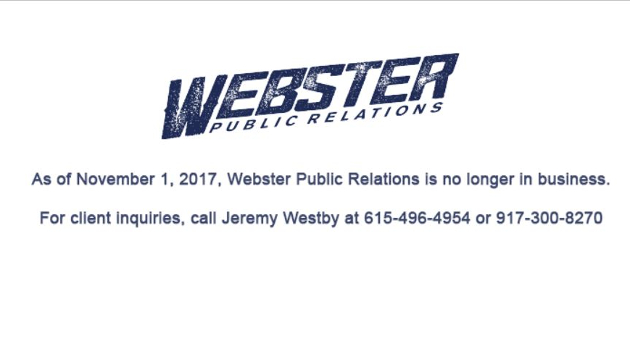 Webster Public Relations—one of country music’s largest publicity firms that represents artists as far ranging as Dolly Parton to Justin Moore to Kid Rock—has ceased operations after its president and CEO Kirt Webster was accused of sexual assault by a former artist represented by the firm, followed by other sexual assault claims.

Austin Rick, who performed under the name Austin Cody in the late oughts, accused Kirt Webster of sexually assaulting him first in a post on Facebook on October 27th, and then via an interview with The Nashville Scene on October 31st. In the accounts, Austin Rick enumerated three instances where Kirt Webster sexually assaulted him, while also saying, “He paid me to keep my mouth shut. And he did everything under threat that he’d make sure nobody in the industry ever heard my name again. It took me a year to escape from him and get away to where he couldn’t find me or reach me any longer.”

Subsequently, News 4 WMSV in Nashville found numerous other individuals who came forward after Austin Rick’s accusations to say they too had issues with Kirt Webster, including an accusation by a former employee that Webster drugged him and he “blacked out” after one drink, and was forced to stay over at Webster’s house.

The roster that Webster Public Relations represented was massive, and included a large number of older, more traditional country artists. Now all of these artists will have to find new representation, including some who might be in the middle of album release cycles, tours, or other promotional campaigns, causing big reverberations throughout the country music industry. A partial list of Webster Public Relations artists includes:

Though not well-known by the public, Kirt Webster was a huge power player in country music, and arguably one of the most important and influential members of the industry. Kirt Webster was a director-at-large for the Academy of Country Music, a board member of the T.J. Martell Foundation, and a member of the Country Music Association and the International Entertainment Buyer’s Association. He was also the recipient of the British Country Music Awards “International Services To Industry Award” in 2016.

After the accusations by Austin Rick, a representative for Kirt Webster released the statement, “As a single adult, Mr. Webster has had multiple relationships over the course of his professional life, all of which have been consensual,” says the statement. “This includes a brief relationship with Mr. Rick. It saddens Mr. Webster that nine years later, after Mr. Rick’s music career has been stagnant, Mr. Rick has taken the opportunistic approach of mischaracterizing that relationship and posting untrue allegations.”