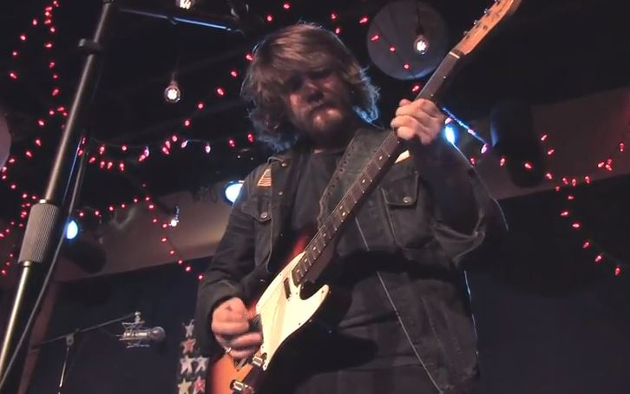 Laur soon became a star in his own right, being nominated in 2015 for Americana’s Instrumentalist of the Year. Joamets became a fixture of Sturgill Simpson’s live shows, including Sturgill’s big appearance on Saturday Night Live in January 2017, and then on the 2017 Grammy Awards in February in front of a huge international television audience. But that was the last appearance of Laur with Sturgill. When Simpson emerged the first weekend of March at the Okeechobee Music Festival in Florida, it was with a stripped-down band, with no horns and no Laur, and Sturgill playing lead guitar himself.

After the rumor mill got brewing hot and heavy after the Okeechobee appearance, Sturgill Simpson addressed Laur’s exit in a statement.

We’re all very sad to say that after nearly four years Laur Joamets has decided it’s time to move on to pursue greener pastures and a gig with little more wiggle room for him to stretch out. It’s been a pleasure and an honor watching him grow into one of the baddest guitar players on the planet and everyone in the band wishes him the best in his future endeavors. To be completely honest, I realized last night how much I’ve missed playing electric guitar without even knowing it so I guess as they say, “it was time”.

I’m also proud to say that Little Joe recently became the proud owner of a US green card and is working towards officially becoming a “Muhrican”. Everyone in the band wishes him the absolute best in both his life and career and we cant wait to see what he does with his incredible talents.

“Laur Joamets will be joining us as our official guitarist!” the band announced officially on July 26th, 2017. “Thanks to Warner Hodges and everyone else that’s played with us over the years.”

Drivin’ & Cryin’ officially formed in 1985 behind frontman Kevn Kinney. The band has since released a dozen or so albums, and had a minor hit with the post hair metal song “Fly Me Courageous” in 1992. Other former members of the group who may be recognized by independent country/Americana fans include Sadler Vaden, who currently plays guitar for Jason Isbell, and Aaron Lee Tasjan.

Drivin’ & Cryin’ tours regularly, and will be playing shows throughout the South and Midwest December through February (check dates) where you can see Laur Joamets plying his guitar skills. Joamets also makes regular appearances in Nashville, including playing “Meter Man” Nashville Guitar Community Show at The Family Wash in October (see below).