Why Are Jamey Johnson & Ron White On This Album Cover? 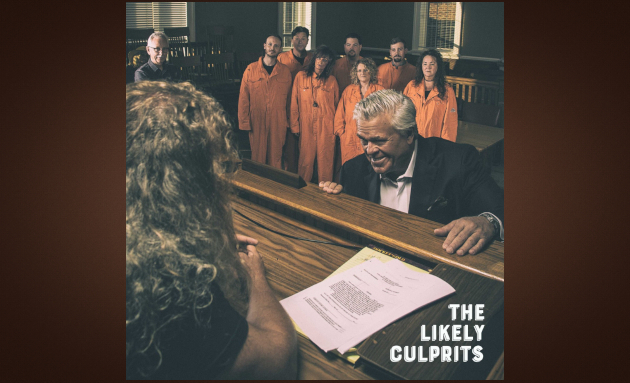 Well because they’re fans of The Likely Culprits, of course.

Who are The Likely Culprits? It’s a crew of seven all-star band members and session musicians who comprise some of the most highly-regarded pickers and singers in the country music business. And after forming loosely nearly a decade ago simply as a group of friends getting together to make music for themselves, they started doing gigs at The Station Inn in Nashville on a semi regular basis in 2011. Now after feeling like they have an established fan base, they’ve just released a debut album of covers and classics for their semi-rabid fans that include Jamey Johnson, who is often seen in the Station Inn crowd when they perform.

“It was a dream because they are truly six of my best friends of my whole life,” says Melonie Cannon, who along with being a solo artist, is regularly seen on stage with Jamey Johnson singing harmony vocals. She’s also performed with Willie Nelson and others (and is the daughter of Willie Nelson / Jamey Johnson producer Buddy Cannon). “We always say that if people could feel what we feel when we get to sing and make music together, they would be happier. It is like getting together to give the united part of us. When you get to make music with people you love, it is just special.”

Along with Melonie Cannon, The Likely Culprits include:

Ronnie Bowman – An award-winning country and bluegrass songwriter and bluegrass artist, Bowman has won the IBMA’s Male Vocalist Award three times and won its Song of the Year twice for “Three Rusty Nails” and “Cold Virginia Night.” In addition to penning No. 1 hits for Brooks & Dunn and Kenny Chesney, he wrote three songs on Chris Stapleton’s multi-platinum album, Traveller, including the Academy of Country Music’s Song of the Year, “Nobody to Blame.”

Brandon Bostic – An acoustic and electric guitar and dobro player in bluegrass, country and Americana. He’s performed in Grammy winner Valerie Smith’s Liberty Pike Band and is a member of the Patty Loveless band. Brandon won an IBMA Award for Gospel Recorded Performance for “Speakin’ to That Mountain” as part of the Becky Buller Band.

Ashby Frank – A roots music vocalist and mandolin player who has recently toured with Mountain Heart, Chris Jones and the Night Drivers, and Jerry Douglas’s Earls of Leicester. In addition to performing with Special Consensus, Michael Cleveland, Ilse DeLange and many others, he has written four Top 5 hits, including “The Story of the Day That I Died,” which was recorded by Junior Sisk and nominated for IBMA Song of the Year.

Garnet Imes Bowman – Starting her music career in Nashville as a session singer, Garnet quickly became a “go to” for top country producers and artists alike. She has worked with Buddy Cannon, and her vocals have been heard in the company of countless artists for studio projects and live shows, including Kenny Chesney, Lee Ann Womack, Chris Stapleton, Dierks Bentley and others.

Austin Ward – One of the most sought-after bass players in Nashville. He’s toured with Kenny and Amanda Smith, and the award-winning band Mountain Heart.

When it came to shoot the album cover, they knew Jamey Johnson needed to be involved. So he was brought in to be the curly-haired judge for the shoot at the Cheatham County Courthouse north and west of Nashville. When Johnson got the call, he responded, ‘You are going to need a lawyer,’ and to everyone’s surprise, brought comedian Ron White along with him. Buddy Cannon, who produced the record, acts as the bailiff, while The Likely Culprits appear in prison onesies, awaiting judgement.

Some of the songs included on the album are Brandy Clark’s “Get High,” Matraca Berg’s “Your Husband’s Cheating on Us,” Willie Nelson’s “Gravedigger,” and Bonnie Raitt’s “Papa Come Quick.” The album was released as a joint venture between Euphony Records and Jamey Johnson’s Big Gassed Records.

“Having known most of them since I first moved to Nashville nearly 20 years ago, I love the Likely Culprits like family and I’m quite proud to have them on my label,” says Jamey Johnson. “I hope you enjoy their new album as much as I do.”