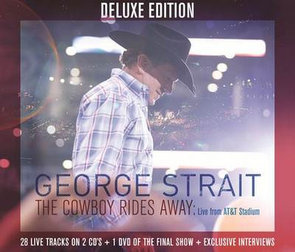 It was announced last week that a deluxe CD/DVD edition of George Strait’s The Cowboy Rides Away: Live From AT&T Stadium album will be released on November 10th exclusively through Wal-Mart. The much more expansive version than the 20-song The Cowboy Rides Away album that was originally released on September 16th will include eight more audio tracks, including collaborations with Alan Jackson and Miranda Lambert, and most notably,  it will include a DVD of the 40-song show, and exclusive interviews. The Cowboy Rides Away chronicles George Strait’s final concert during his farewell tour held at the home of the Dallas Cowboys in Arlington, Texas on June 7,2014, that shattered indoor concert attendance records.

Though this new deluxe edition seems like an excellent way to experience the concert if you were unable to attend, or the perfect reminder if you were, or it might make a great gift for the country music fan in your family since it’s being released right before Christmas, I for one will not be purchasing this deluxe edition, or frankly any edition of The Cowboy Rides Away. An no, it’s not because of a natural aversion to placing a foot into Wal-Mart, though that certainly doesn’t help.

It is because up to this point, the entire Cowboy Rides Away project has been so unnecessarily and gratuitously slathered with Auto-Tune, it has ruined the entire experience for many George Strait fans. Starting with the first television broadcast of the concert that aired on CMT on August 29th, to the first 20-song album, Auto-Tune usurped the recording of the twang and tone that went into making George Strait’s songs and voice so memorable during his Hall of Fame career.

Nor should we. We’re talking about a historic event, and the way it has been chronicled for future generations is not only inaccurate, it isn’t particularly entertaining in its current form for people who love George just like he is, without the unnecessary and distracting enhancements. There has been positively no acknowledgement of the Auto-Tune issue from the label or George Strait’s camp, even though all of the most prominant customer reviews on iTunes and Amazon, and many of Strait’s own threads on Facebook and Twitter, are full of fans condemning the Auto-Tune on the album.

The deluxe edition release of The Cowboy Rides Away could be the perfect opportunity to correct this issue, and if so, it would be all the more reason to purchase it. But unless someone expressly says the Auto-Tune issue will be resolved, we have no other choice but to believe the expanded content will only be more of the same.

Let The Cowboy Ride Away with dignity, not saddled with pitch correction.