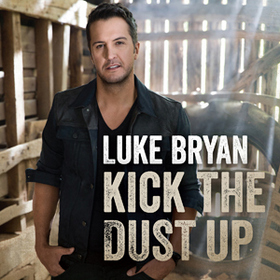 Apologies to those who stopped by to read an unceremonious roasting of Luke Bryan’s new song “Kick The Dust Up” filled with wild hyperbole and much pointing and laughing. Maybe in the future there will be a more appropriate time for such an exercise, but at the moment the situation at hand calls for much more sober considerations.

Luke Bryan right now is the biggest country music star on Earth. Ball your little fists up and shake them all you want, flip birds, hang your head in shame, and say he isn’t country until you’re blue in the face, but the unequivocal truth is right now there’s nobody bigger in the genre. Not Sam Hunt, not Florida Georgia Line, not anyone. And really, it’s been that way now for going on two years. Luke Bryan can release six singles from the same record and have them all hit #1. He is the current generation’s country music king.

This is the deal with “Kick The Dust Up”: This song didn’t come from inspiration, or any other natural stimulative process that results in an individual wanting to express themselves through song. This song is simply an audio algorithm optimized to ear worm as many people as possible and make Luke Bryan a million dollars.

That in itself doesn’t make the song exceptional. We’ve seen this in country before, and it’s rather commonplace in pop. But “Kick The Dust Up” is not just your average bad song. It symbolizes where country music may be headed, or not headed in the next 18 months to two years, and its reception and performance could be critical for country music’s long-term outlook.

Luke Bryan has defended himself in the past by insisting that he’s not a Bro-Country artist. He may have a Bro-Country song or two, but when you look deeper into his music, there’s much more there than backroads and cold beer. And in the estimation of this professed and well-documented Luke Bryan critic, I would tend to agree. Luke Bryan is no Florida Georgia Line.

But where Luke Bryan has opened up his flank to being susceptible to Bro-Country categorization and criticism is with the lead or biggest singles from his last three records. With 2011’s Tailgates & Tanlines, it was “Country Girl (Shake It For Me)”—the song about shaking it for the critters and the crickets and the squirrels and all that. Then in 2013 on his album Crash My Party, the single “That’s My Kind of Night” was the huge smash—the song Zac Brown called the “worst song ever.” And now with Luke’s upcoming record Kill The Lights, we get “Kick The Dust Up.”

What do all these songs have in common aside from being the lead singles from Luke Bryan albums, and prefect examples of Bro-Country throughout its gestation period beginning in 2013? They were all written in part by the Godfather of Bro-Country, the true man behind the green curtain pulling the Bro-Country pulleys and levers, and the man with the most to lose or gain by the elongation or bereavement of the Bro-Country trend—songwriter and sometimes Fern Bar brawl instigator Dallas Davidson.

Just as Luke Bryan has been on record saying he’s more than Bro-Country, Dallas Davidson has been on record saying Bro-Country is not a problem. Dallas refuses to acknowledge that it’s in decline, that it’s anything that even needs to be classified separately from everything else in country, and professes that the songwriters and singers of the sub-genre are just innocent little country bumpkins singing about what they know about and how they live. So when Luke Bryan releases a song about having a party down a back road in a corn field, hey, he’s just singing about where he’s from.

But whether Dallas Davidson wants to acknowledge it or not, in May of 2015, Bro-Country is on life support. Radio programmers have been on record now for six months or more saying they’re shying away from the country subset because it became too repetitive, and they want to be a step ahead of any potential backlash or downturn. Bro-Country has been lampooned at every turn, and not just by country music pundits, but by critics at large, cultural observers, and even comedians across huge swaths of the American culture. Bro-Country has become a laughing stock, and almost as if to save Bro-Country’s legacy, or at least attempt to extend its period of influence, here comes Luke Bryan with a Dallas Davidson-written song as yet another lead single.

Remember now, Luke Bryan is the biggest thing in country music, and his last six singles have gone #1. Actually it’s the last nine if you go back to Tailgates and Tanlines. It’s virtually guaranteed “Kick The Dust Up” will go to #1 too. Or will it? Bro-Country might be dead or dying, and it doesn’t matter how much Dallas Davidson wants to believe otherwise. But can radio programmers resist the urge to put this very Bro-Country song in the radio in major doses?

Ironically, it doesn’t even matter how good the song is or not. Independent music fans love to say that mainstream listeners listen to what they’re told to listen to. But recently, this sinister notion has gone even another step further. Now mainstream fans are listening, even though they know they don’t like it. They’re not fans of songs or albums, but artists, and their loyalty is unwavering regardless of how bad the music is.

A very similar pattern transpired when Jason Aldean released “Burnin’ It Down.” You went on Jason Aldean’s Facebook page, scanned through his Twitter account, and read the comments on YouTube, and overwhelmingly Aldean’s own fans were flippant that he would release such a song. The reaction was bordering on one-sided. But of course the song went to #1 anyway. Same could be said for the Carrie Underwood / Miranda Lambert collaboration “Somethin’ Bad.” Fan reaction was lopsided in opposition in the initial reaction, yet it still shot to #1.

Maybe not with the same vehemence, but Luke Bryan’s “Kick The Dust Up” has also solicited curiously strong opposition from his own fan base. But it doesn’t matter. It’s still likely to go to #1, and the big story will be if it doesn’t. And like the groundhog seeing his shadow, if this song scores big in country music, it could give us 18 more months of Bro-Country, even if at the moment the trend sits on life support.

Or maybe Luke Bryan and Dallas Davidson have overplayed their hand. “Kick The Dust Up” is Dallas Davidson saying, “Screw you. You say Bro-Country is dead and nobody wants to hear about throwing a party in a cornfield? Well watch me take it to #1. Again.” This is a pissing match as much as anything, and a way for Luke Bryan to draw some attention to his new upcoming record. Listen to the verses; they don’t even make sense. Luke Bryan, Dallas Davidson, and Capitol Nashville released this song because they think the country consumer is too stupid to understand how terrible it is. In the end, the quality doesn’t matter. Since Luke Bryan’s name is on it, people will buy it.

So this is it. Right here, right now. Is Bro-Country going to be vanquished, or is it going to be given new life? Who holds the keys to country music? Is it radio programmers, the country music listening public, including many of Luke Bryan’s own fans, or is it Dallas Davidson and the purveyors of formulaic songwriting?

“Kick The Dust Up,” isn’t just bad or the “worst song ever,” it’s a test the resolve of the genre if it’s serious about its non Bro-Country pledges, or if the sway of the biggest artist in country music right now will be too much to resist.