Why Sunny Sweeney’s “Trophy” Is a Victory

For most artists, their careers start off by driving around in vans to club shows across the country, and if they’re lucky perhaps they graduate to a bus sometime down the road. Most artists start by making some noise in their home state, and then maybe hope to garner the attention of a national audience and a Nashville major label. Most artists begin their careers most closely tied to the roots of the music, and then start to work in more commercial sensibilities to broaden their audience as times goes on.

Not to gloss over the very early stages of her career, but for Sunny Sweeney, the arc has been nearly the opposite. It’s been inverted. Yet her situation still feels very much like a victory, and a success story.

One of the very first signees to Scott Borchetta’s Big Machine Records when he first started the label was Taylor Swift. Another was Sunny Sweeney. She had a Top 10 hit on country radio in 2010 with “A Table Away.” She was a part of one of the most successful and fastest-growing label groups in country music history, and she was a respected songwriter who wrote most of her material. But Nashville and Big Machine weren’t her home. Texas was, and so after a couple of albums, she came home and became an independent artist.

Even still, in her first solo released record, 2014’s Provoked, the Sunny Sweeney sound still had some of that Nashville mainstream sensibility, or perhaps it would be more appropriate to assign the influence to the more commercial elements of the Texas country scene. Not a pop record by any stretch, but some of the vestiges of her time in the mainstream world remained. 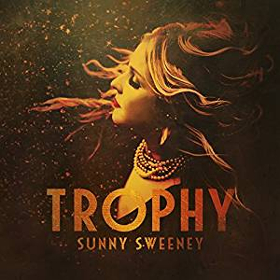 With Sunny Sweeney’s new album Trophy, it’s country, it’s Texas, and most importantly, it’s Sunny Sweeney all the way. This isn’t a hard country honky tonker cover to cover, but it’s definitely got those moments, and never do you feel like Sunny is making a compromise for anyone. And beyond the sound and style, Trophy has not one, but two top shelf songwriting efforts that will compete with even the stalwart songsmiths in Americana for some of the best all year. And maybe three songs that would fall into that category.

Trophy is the full package. It is a homecoming for Sunny. Like she says so well in the song “Nothing Wrong with Texas,” we all get so swept up in thinking there’s greener pastures, and better opportunities in latitudes and locations beyond our own, we forget that sometimes the things we go searching for in life are right under our noses. It’s not always a compromise to settle. Sometimes there’s nothing better than what you already have.

The opening song “Pass The Pain,” and the strong cover of the old Jerry Jeff Walker song “I Feel Like Hank Williams Tonight” written by Chris Wall give the country crowd the red meat on this record they crave, and help set the tone and mood of Trophy. But the depth is what will be the most lasting contribution. “Bottle By My Bed” is such a well-crafted song, and you can it tell comes straight from the heart of Sweeney. A line like “I don’t even know you yet, but I know I love you,” is something that is just so hard to hear, but incredible to behold. It’s this type of specificity that gets scrubbed out of most mainstream music because it’s too real, and too touching. “Bottle By My Bed” is hard to top.

Other very strong songwriting efforts include the sweet “Grow Old With Me,” and the touching “Unsaid”—the latter being an idea done before many times, but still hitting on an element of life where the guilt finds its way into the grief, and delivers a perspective we all must heed about the fleeting nature of moments, and what to really prioritize and cherish.

And there’s also a few songs that are sensible and fun, and fit into that female style of country music that has a little attitude and sway to it, like the salty “Pills” written by Brennen Leigh and Noel McKay, and the revenge-driven title track. This Pistol Annie type of stuff will make Trophy not just a favorite of critics, but will find an ear with fans who don’t just want to cry every other song.

Trophy is the name of Sunny Sweeney’s fourth record, and a song about an attitude problem of an ex-girlfriend or wife. But the title is also indicative of a victory. The problem with money and fame is that you can always have more of it. The true victories in life are the ones earned when you discover something about yourself, and achieve a goal that is personal to you. Sometimes this comes with the earning of great wealth and recognition, and sometimes it comes at the compromise of them. But the measurements of fame and wealth are arbitrary and capricious. What’s most important is the personal discoveries you achieve. That is the point of the pursuit of happiness, and what is at the heart of Trophy.