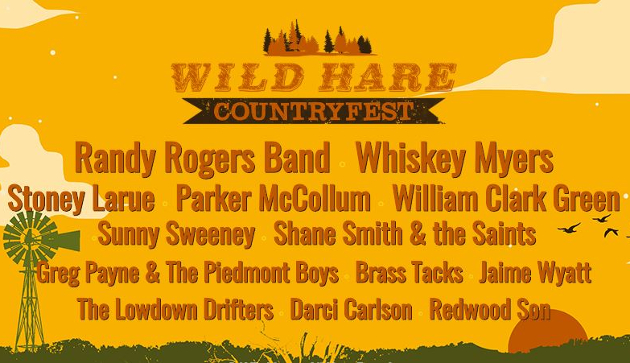 Texas music and independent country continue to gain market share and offer a better, and more healthy alternative to the mainstream, and we’re continuing to see this reflected in the ever-expanding festival space. Along with new festivals such as Mile 0 Fest in Key West, Florida, the Tumbleweed Festival near Kansas City, a new festival in Oregon is gearing up for its inaugural year to offer the Pacific Northwest their first taste of the Texas festival experience, along with hosting a slew of regional artists.

Called the Wild Hare Country Festival, it’s set to take place July 20th and 21st, 2018 at the Pat’s Acres Racing Complex in Canby, Oregon, about 20 minutes outside of Portland. With headliners such as The Randy Rogers Band, Whiskey Myers, William Clark Green, and Saving Country Music 2017 Song of the Year winner Sunny Sweeney, the Wild Hare Fest isn’t just dipping its toes in the water, it’s taking a plunge.

“There is a revolution happening in country music that is centered around real deal, honest, heartfelt songwriting and performances that resonate with true country fans,” says festival co-founder Joan Monen. She is also the proprietor of the Wild Hare Saloon, which operates two locations in the area, and has been booking similar acts in their establishments. They’ve also been promoting a tribute band festival called Harefest with the production company True West. So even though Wild Hare is in its inaugural year, they aren’t new to the festival game. “Our customers have been asking for this for years, and we are excited to deliver!”

And this won’t just be a Texas/Red Dirt invasion. The West Coast and Pacific Northwest will be well represented. Saving Country Music Album of the Year nominee Jaime Wyatt from Los Angeles will be performing, as will Darci Carlson who just released a new, self-titled album, along with Brass Tacks from Oregon, and The Lowdown Drifters from Washington State, and West Coasters Redwood Son. Greg Payne & The Piedmont Boys from South Carolina will also be representing country music from east of the Mississippi.

As independent artists from Texas and beyond look to expand their scope and find new fans beyond regional borders, events like with Wild Hare Fest is how they will do it. Camping and RV Parking will also be available. For more information visit WildHareCountryfest.com .