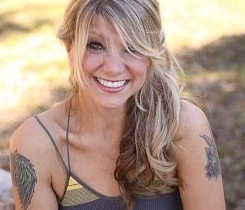 Sunday was 4/20, an unofficial holiday for marijuana smokers all around the world, and unfortunately one such reveler with a father famous for his fondness for pot found herself on the wrong side of the law. Paula Nelson, Willie Nelson’s 44-year-old daughter and front person for the Paula Nelson Band, was arrested on 4/20 in Menard County in central Texas when less than two ounces of marijuana was found on her person during a routine traffic stop by a Menard County deputy.

“A traffic stop was executed and drugs were found,” says Menard County Sheriff Buck Miller to Ft. Worth Weekly. Possession of less than two ounces of marijuana is a Class B misdemeanor punishable by up to 180 days in jail and a $2,000 fine. Paula has subsequently been released on bond. “Let’s just say I’m writing a new song called ‘Spread ‘em, squat and cough.’” Paula joked on Facebook while posting a picture of her being handcuffed.

Paula Nelson has been a singer and songwriter much of her life, favoring a more rock and blues style compared to her father, but with country foundations from singers like Jessi Colter and Rita Coolidge. Her Paula Nelson Band has been together since 2004, and tours in Texas and around the US.

Two years ago on 4/20, Paula’s father, who’s a well-known advocate for marijuana law reform and legalization, had a statue dedicated to him in downtown Austin at 4:20 PM in front of the Austin City Limits’ Moody Theater. Willie was also busted for marijuana in Waco in 1994 when he pulled his car to the side of the road to take a nap, in a bust in 2006 in Louisiana, and in Sierra Blanca, Texas in 2010 at a border checkpoint.