Yes, and Yes! Willie Watson’s Folksinger, Vol. 2 On The Way

Ever since former Old Crow Medicine Show member Willie Watson released his debut solo record Folksinger, Vol. 1, we’ve been waiting impatiently for Vol.2, if there would even be one. With only himself and a guitar, Willie Watson was able to accomplish what entire bands struggle to do their entire careers, which is evoke the old memories of songs from the past in a form as rich as when they were originally sung and composed. There’s just a certain magic in the muse and mannerisms in Willie’s music that make it more than just a reconstitution. It’s like you’re witnessing a ghost in your midst.

“I’m not trying to prove any point here,” Watson says about his music. “I’m not trying to be a purist. There’s so much beauty in this old music, and it affects me on a deep level. It moves me and inspires me. I heard Leadbelly singing with the Golden Gate Quartet and it sounded fantastic, and I thought, ‘I want to do that.’ I heard the Grateful Dead doing their version of ‘On the Road Again,’ and it sounded like a dance party in 1926, and I wanted to do that, too. That’s the whole reason I ever played music in the first place—because it looked and sounded like it was going to be a lot of fun.”

Willie Watson is also known to perform with the Dave Rawlings Machine, and is set to make his acting debut in the Coen Brother’s upcoming movie, The Ballad of Buster Scruggs.

Folksinger Vol. 2 is out September 15th via Acony Records, and is currently up for Pre-Order. Watson will also be on tour through the late summer and fall. 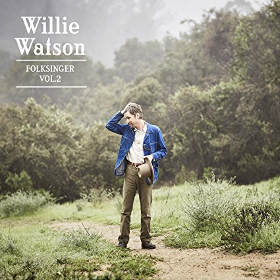