Trigger Down with Pop Country 125 Comments 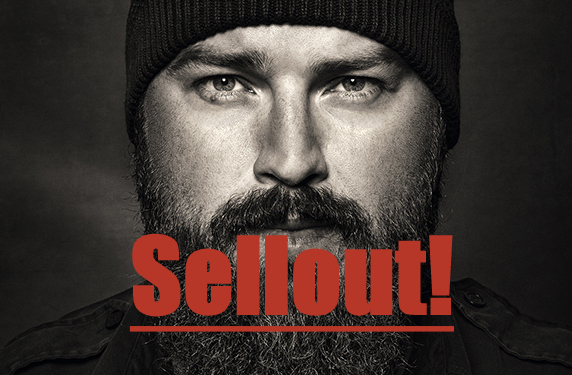 The “Benedict Arnold of Country Music,” a.k.a. Zac Brown, sat down recently with the always-complicit Rolling Stone Country to participate in yet another puff piece, and shoved his foot so far down his throat, Cheryl Tiegs would be colored impressed by his the once country star’s incredible pliability.

Speaking to them about his bullshit and aggressively-formulaic foray into EDM idiocy called “Beautiful Drug,” Zac Brown attempted to justify his incredible hypocrisy by speaking to people on economic terms, like that’s what’s going to mend the hearts of his fans who feel like they’ve been meat cleavered right through the rib cage by Zac, especially after he publicly called out Luke Bryan for his song “That’s My Kind of Night,” and the lack of real instrumentation on the track.

“Well, there’s a bunch of songs on [Jekyll + Hyde] that are country, but we don’t want to abandon any of the market we have now. We just want to gain new market,” Zac says.

Oh, well isn’t that great. So Zac wants all you country people to know that even though he’s a flaming hypocrite and broke your heart, he’s still values your fucking money. Just like he values the money of EDM fans. So hey, don’t go anywhere. It’s evolution, or whatever.

I mean, who has the hubris to talk to the public in these terms? I don’t give a shit about what you “want” Zac Brown. You lied to people, you called out other artists, and then you turn around and do something that’s worse, and then you feel like you have the right to continue to appeal to country fans just because you buried some songs on your album that strain to be called “country” in any capacity because they include a little fiddle?

And that’s just where the bullshit starts.

Ha ha ha ha! Oh my goodness. So first off, by Zac Brown saying “Beautiful Drug” is “STILL” a good lyrical song, he’s admitting right there that the music is bullshit. But somehow that bullshit is justified because the words are so deep and soulful?

Here’s the chorus of “Beautiful Drug” ladies and gentlemen:

Oh but somehow this puff piece interview with Rolling Stone gets even more ridiculous. As Zac Brown is explaining how he still loves “old” country—you know, because he still wants your money too country fans—he says,

“Some of the really old country music has amazing songs and stories, and the instrumentation is pretty much predictable.”

Are you fucking kidding me? So “old” country is predictable, and “Beautiful Drug” is innovative? Is that what you’re trying to sell people Zac Brown? Because the beat for “Beautiful Drug”—the exact same cotton pickin’ beat that is found on every single EDM song since the beginning of space and time—is as predictable as music gets, along with the stupid bass drop that “Beautiful Drug” also employs. And somehow you’re going to compare this to Ralph Mooney ripping a steel guitar solo, or a Bill Monroe run on the mandolin, or an Earl Scruggs banjo breakdown? That’s the beauty of humans playing instruments Zac Brown. It’s different every single time, and is pock marked with the beauty of human imperfection. The 1’s and 0’s of “Beautiful Drug” are the purified essence of predictability.

Zac Brown has six amazingly-talented musicians in his band, yet they don’t do shit in the studio version of “Beautiful Drug.”

I know what some of you are thinking out there. “Oh come on Trigger, if you don’t like the song, just don’t listen to it.” Am I right? That’s what Zac Brown says.

“You can de-select the songs that you don’t want to have on the record.”

Oh, except when you released them as singles, TO COUNTRY RADIO. Just like Zac Brown has done with “Beautiful Drug.” Zac hopes you hear this song everywhere, whether you want to or not—walking through the aisles of Walgreens, stopped at a red light with some asshole with 12″ Kikkers in his trunk bobbing his head to this bullshit. “Beautiful Drug” is a garbage song, country or not, and Zac Brown and his label are doing everything they can to make it as ubiquitous throughout American culture and beyond as possible. Oh, and all you country fans? Well there’s a couple of country sounding album cuts you can chew on as a consolation prize.

And “Beautiful Drug” is just where all of this gets started folks. According to Zac Brown, he’s found his new passion in music.

“I love electronic music,” says Zac. “I spend a lot of my time listening to that and just trying to understand what makes it work what makes it move people the way it does and why they have some of the best-selling festivals in the world.”

See, once again Zac Brown is coveting the popularity of EDM and how he wants to be a part of that, yet he’s also admitting here he doesn’t quite yet know how it works. Country artists make bad EDM artists, because they don’t know what the hell they’re doing. “Beautiful Drug” is the perfect example. I have no doubt there’s some folks out there doing some amazing stuff with electronic music. But none of them are named Zac Brown, and they never will be. He’s an interloper, a carpetbagger. And if I was an EDM fan, I’d be even more incensed at this putz for screwing up music I hold dear, just how country fans feel. That is the ultimate failing of the mono-genre.

Stick with what you know. Stick with what’s in your heart. These have been the guiding principles for artists since the dawning of time. If Zac Brown wants to dabble in EDM music, he can go right ahead. Comb through the vast archives of Saving Country Music, and see if you can find one instance where I gave shit to Zac Brown for collaborating with Avicii. You won’t find anything, because hey, Zac Brown can do whatever he wants. There’s nothing wrong with collaborating with other artists in other art forms.

The problem is calling “Beautiful Drug” country. Zac Brown has created this conflict. Zac Brown is the transgressor. Not even Taylor Swift was this stupid. And being open and honest about his economic intentions with “Beautiful Drug,” there’s only one thing left to say about Zac Brown:

“We play all of our own instruments, we write the best songs that we can, and we put harmony on the songs, we have a real band,” —Zac Brown, calling out Luke Bryan, September of 2013.