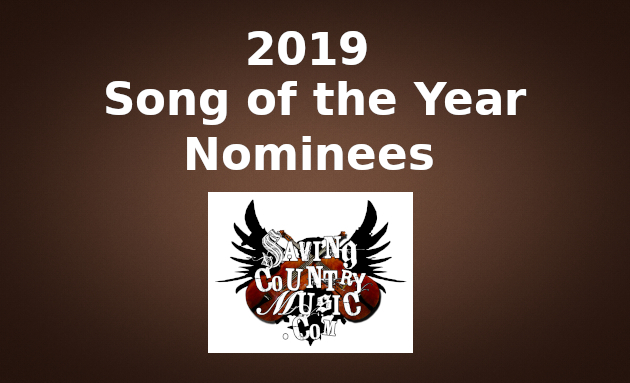 A Saving Country Music Song of the Year candidate is not just your favorite ditty that gets stuck in your head. These are songs that change hearts, change lives, rest in your head for years to come, open up new ideas, or unlock memories or emotions you haven’t felt in years. Song of the Year nominees are the reason you’re a music fan. They can change the world, or at least change your world.

Similar to how it was a strong year for Album of the Year candidates in 2019, so it is for Song of the Year nominees. The choices are difficult, but as always, this isn’t just a decision for Saving Country Music. Your input is strongly encouraged, thought please understand this is not just an up or down vote. It’s your job to convince the rest of us why a certain song should be considered over the others.

And just because something isn’t listed in the field of candidates or in the Honorable Mention category doesn’t mean it’s not qualified. Picking songs is always more personal than albums. We’re not looking to pit songs and songwriters against each other, we’re looking to combine our collective perspectives and opinions into a pool of musical knowledge for the benefit of all. So if you have a song or list of songs you want to share, please do in the comments section below.

So without further ado, here are the nominees for Saving Country Music’s Song of the Year. You can also listen to all the nominees and honorable mentions on the Spotify Playlist, or in the Spotify player below.

In the next year or so, you may struggle to find another collection of 10 songs so well-composed with wit, insight, and soul than the ones found on this debut album from Gabe Lee called Farmland. More folk than country, but more country than most of what you hear on the radio, Farmland is a bold stroke of confident and articulate songwriting prowess filled with stories of broken heats, failures and frailty, and cutting insight into the trappings of American life. It’s not unfair to draw comparisons to Dylan and Prine when listening. In fact that is likely to be your very first impression, even before you become enthralled by Lee’s turn of phrase. Though it seems onerous to orphan any specific song from this Gabe Lee effort as the best, “Eveline” is the one that listeners keep harping over the most.

Spinning a tale that puts your very perspective into the shoes of the singer or the characters they create is the true mark of a master songwriter. Great composers can work with a conservation of words, because all the specific details of the story, including the surroundings and settings and even the look on people’s faces, all fill in themselves via the imagination of the listener, making the story feel that much more intimate because it’s partially born of their own experiences. You’ve likely never robbed a bank, or found yourself clutching a love letter as imprisonment or death nears. But you sure feel like you have by the time Ian Now is done with you in “Letter To Madeline.”

As the human experience continues to become more polarized and dependent upon our circumstances and ideologies served via economically segregated communities and social media confirmation bias, breaking down the barriers of perspective has never been more challenging, or important. The Steel Blossoms contextualize this dilemma with incredible wisdom on “County Line,” bravely encapsulating both the trappings and virtues of the rich and poor in one setting, while at the same time slyly illustrating how similar we all really are.

There is no shortage of empowerment songs full of trite platitudes and pithy affirmations in today’s energized and roiled social environment. However despite the quantity, there is a serious dearth of songs that really touch at the heart of matters through sincerity and storytelling to where you can’t help but listen and succumb to life-altering empathy and deeper understanding. Every great songwriter sets pen to paper hoping to change the world in some small or grand capacity with the way they shape their words and conjoin them with chords and melody. With Emily Scott Robinson and “The Dress,” this ambitious goal is achieved.

A well-written song is a gift in itself, but it’s a performance that can take a great song into the stratosphere, and that is what Yola does with “Faraway Look.” This song and performance is personally responsible for two of Yola’s four recent Grammy nominations, and has launched her into headliner status in the Americana realm as the new queen of country soul. Writing to your vocal strengths is one of the greatest challenges for singers and songwriters. Yola takes the fear of fading love and pairs it with her howitzer of a voice for a song that will have impact far beyond the confines of 2019. You think all hope is lost in modern music? Listen to “Faraway Look” and be convinced otherwise.

Normally Song of the Year nominees are an elite group of incredibly heartfelt tracks whose primary requisite is stirring emotions. If it can’t make you cry, it’s not included. But starting in 2018 and in fairness to all those infectious boot scooters out there that get the blood pumping, the very top pick of these non emotional songs has been included here for equal consideration among the onion cutters. At the top of that heap in 2019 you have Ben Jarrell’s “Black Helicopters.” His whole album Troubled Times with its 10 songs and diorama cover is worthy of your attention. But this ode to paranoia and conspiracy takes the cake and will melt your face off of proper. Put it on loud and piss off your neighbors.

On paper, the story behind “Rodeo” is compelling, but not exceptional. It’s Charlie Marie’s performance that allows this composition to rise to be considered right next to a daunting field of competition as one of the most moving songs released in 2019. “Rodeo” is more like Patsy Cline than Patsy Cline is, while still expressing and undeniable originality from this Rhode Island singer stricken with a strange, but undeniable love and obedience to classic country music. Listening to “Rodeo” gives you the same chills as one imagines that inescapably seeing a ghost would cause. “Rodeo” less a song, and more an evocation of country past in musical form. It reminds you why you became a country music fan in the first place.

The theme of devotion to himself and his family runs through virtually all the tracks of Cody Jinks’ new album After The Fire, including what many regard as the best song on the record, the acoustic “William And Wanda” co-written with his wife Rebecca Jinks. What starts off seeming to be a sweet little song about a fussy old couple, reveals itself to be something deeper and more touching. No spoilers just in case you haven’t heard it yet, but you may want to keep a box of Kleenex by your side. “William And Wanda” underscores once again that the appeal for Cody Jinks isn’t all about Outlaw muscle. It’s combining driving honky tonk music with some of the best songwriting of this generation.

Chris Knight makes you realize things about the common struggles and simple pleasures of life that would have otherwise passed you by. He can turn the trite and obvious into moments of magic and epiphany that reset your entire perspective on the world, all while relying on the most colloquial of vocabulary as his medium. This hole we’ve dug for ourselves with all this left and right stuff is so deep we can’t even see over the edge to the eternal truths of life. But Chris Knight’s “The Damn Truth” brings it all back into perspective for everyone.