A Retrospective Reconsideration for the Legacy of Brooks & Dunn 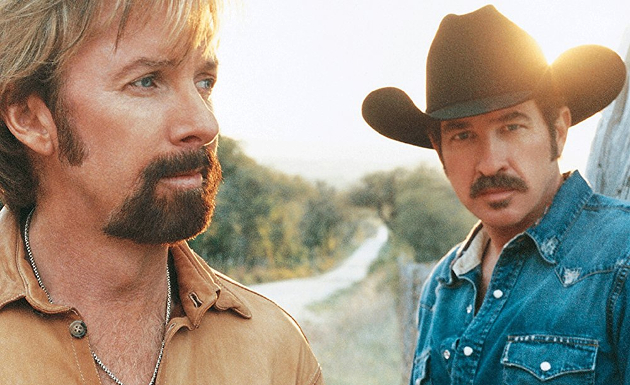 Brooks & Dunn. Oh how some traditional country fans loved to hate on these guys in their day, and many still do. And let’s face it, they’re low hanging fruit in many ways. About their only saving grace is when they were racking up one hit after another, Garth Brooks was out there flying over stadiums on suspension wires and springing Chris Gains on us, meaning most of the venom for the rabid commercialization of country in the 90’s was directed his way, and all Brooks & Dunn received were passing glances and ricochet splatters.

But rest assured, if you brought up the name Brooks & Dunn to your crotchety old uncle, or the twinkly piano intro came on the radio to “Neon Moon” in the wrong company, you’d get an earful about how these pretty boys didn’t know a lick about country music, and they better by God be glad the Texas Troubadour Ernest Tubb was not longer around to kick their asses.

What were those blonde streaks in Ronnie Dunn’s hair all about anyway? And way before the same accusation found its way to Florida Georgia Line’s Brian Kelley, people were asking just what the hell Kix Brooks actually did in the duo. The answer was the same in both instances: they qualified them for big industry awards in duo categories initially set up for the likes of Loretta and Conway, or Tammy and George that had been mostly vacated by the late 80’s, leaving a duo like Brooks & Dunn to emerge and win the CMA’s Duo of the Year every year but one between 1992 and 2006—an incredible feat that may never be topped in country music history.

Brooks & Dunn will eventually be inducted into the Country Music Hall of Fame, and likely in the next few years. And they will deserve it. And it’s not just because they amassed incredible sales numbers. As few around here need to be told, commercial success is not always a marker for quality. In fact in the current era, big numbers could be a good marker for what to avoid. But Brooks & Dunn deserve to be considered among the elite of country music history because ultimately their contributions to the genre have proven to be important, influential, and lasting by the harshest music critic of all: father time.

Yes, it’s often true that nostalgia and the loss of quality and taste in the country music present tense can magically rehabilitate music that at the time was seen as sub-par compared to its predecessors, or even some of its peers of an era. This happened with Garth Brooks for sure, as well as other participants in the “Class of ’89” of which Brooks & Dunn can be considered honorary members of (“Brand New Man” was their first hit in 1991). When looking at music retrospectively, it’s important to ask if it’s simply being embellished by fond memory, or was it real country of quality that resonated and influenced the music in its moment in a positive manner? And giving close consideration to Brooks & Dunn, and the duo’s top songs especially, it’s hard to not answer in the affirmative.

Some traditional country fans love to accuse Brooks & Dunn of being a pretty boy construct of a Music Row major label. But projects like those from the 90’s to now rarely feature artist who write their own hits like Brooks & Dunn did. They wrote most of their first albums themselves, including the lasting country standards “Brand New Man,” “Neon Moon,” and “Boot Scootin’ Boogie.” One of the few hits they didn’t write was an impressive cover of B.W. Stevenson’s “My Maria.”

“My Maria” and so many others exposed Ronnie Dunn as a singular singing talent of modern country history. And though Kix Brooks was more the counter puncher to Dunn, he did his part hitting the right harmonies and helping bring the songs of the duo to life with his pen, and every once in a while he’d impress you with a tune too. With pairs of singers, especially of the same gender, it’s usually best if one is the clearly stronger voice, and takes the lead.

None of this means that Brooks & Dunn didn’t have their missteps, especially as their career elongated. Entering the 12th year as a duo, 2003’s #1 hit “Red Dirt Road” now looks like a precursor to the Bro-Country movement that would infest country music years later. 2006’s “Hillbilly Deluxe” was downright Bro-Country incarnate before we knew what Bro-Country was. As time went on, the duo began to stretch to find the commercial success of their previous work, and ended up veering out of their comfort zone and what made them cool to begin with, especially with their radio singles. There was still some quality stuff on the later albums, but by the time they announced their split in 2009, it seemed a few years too late if anything.

Brooks & Dunn made it easy to sour on their music later in their run, but their early output isn’t just easy to listen to, it’s outright legendary. “Neon Moon,” “My Maria,” and “Brand New Man” are all now undeniable country music standards. If you listen to “Whiskey Under The Bridge” and say it’s not country, you don’t know what real country is. And even though Brooks & Dunn wasn’t always great, it was always country. They took their bow before they had to succumb to the onset of country rap or machine beats (even though later Ronnie Dunn would dabble a bit in this in his solo career).

Don’t worry, there will be plenty of country artists from the early and late 90’s who we won’t retrospectively be praising as we get older and the music of today gets worse. It’s important and healthy that some older music does get left behind. But you’re short changing yourself as a country fan if you write off many of the big songs and early albums of Brooks & Dunn as forgettable fluff. They’ll never achieve the same greatness of George Strait, or the cool factor of Dwight Yoakam. But Brooks & Dunn is still good for a Saturday evening barbecue, and will be 50 years from now after many others from their era are forgotten.