For many up-and-coming country artists, simply getting to meet their country heroes is thrill enough. Getting the honor of portraying them in a big theatrical production? That is the thrill of a lifetime. 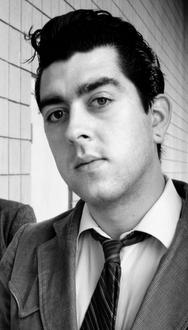 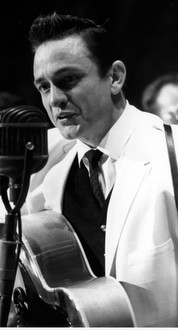 Adam Lee of Kansas City’s Adam Lee & The Dead Horse Sound Company is getting that very chance by apprising the role of Johnny Cash in the Chicago-based production of the critically-acclaimed and Tony-nominated Million Dollar Quartet—a musical based around the legendary Sun Studios recording session that transpired on December 4th, 1956 and included the star power of Elvis Presley, Jerry Lee Lewis, Carl Perkins, and Johnny Cash.

Adam Lee, who has one of the most pure and natural country bass voices you will find—as low as Cash’s legendary pipes—joined the stage show live last Wednesday (7-3-13) after weeks of preparations and rehearsal.

“It kind of came out of the blue,” Adam Lee explains. “Back in Spring I was on tour—me and my buddy Matt Woods were out at South by Southwest—and I got an email from the people at the show. I knew one of the fellas from the show, a guy named Lance Lipensky who plays Jerry Lee Lewis. We met during another tour I was on up in Chicago. They said they were looking for somebody to maybe take over Johnny Cash, and asked if I wanted to audition. It’s certainly a different kind of thing. It’s something I never expected. But I figured what the hell, I’ll come up and see about it.” 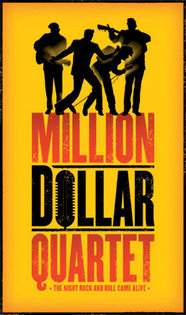 The Million Dollar Quartet musical has been running now for 5 years. It was co-written by renown American music biographer and historian Colin Escott, and the musical arrangements were handled by Chuck Mead of BR549 fame.

“I thought if anything I go up there and get a chance to meet these guys and sing in front of them. So I came up the first week of April and did an audition. They seemed happy with it. I’d never acted or anything, and they told me that day they weren’t going to have anybody act, they were just looking for people to sing. So I went into the audition and Colin, Chuck, and some of the producers were there, and I sang. Then they asked me, ‘Well can you act?’ So I read some lines and I left. I didn’t really hear much back. And then they called me 3 months later and asked me if I wanted to come up here [to Chicago]. This past Wednesday was my first show. I’ve got 8 shows under my belt now, and I’m feeling pretty good. 5 days a week, 8 shows a week. It’s a lot of fun.”

Adam Lee has been a touring musician on and off since 2008 when he released his first album with the Dead Horse Sound Company called Ghostly Fires. That album and 2010’s When The Spirits Move Me are favorites amongst traditional country fans familiar with Adam Lee. Playing the role of Johnny Cash, especially since Lee had never acted before was intimidating. But as Adam explains, they weren’t looking for an impersonator. 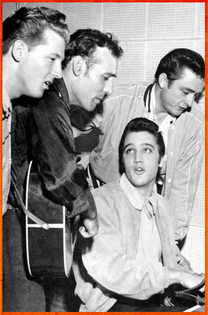 “It’s obviously quite an undertaking. One thing I really like about their attitude with their show is that it’s not like a legends show. It’s not a tribute artist act where they want you to impersonate this person and fake it. It’s more about trying to take the person’s attitude and persona, and filter it through yourself. You’re definitely encouraged to be yourself, and bring yourself to the table.”

And Adam says his training as a musician helped, especially because the focus of the Million Dollar Quartet is not just the stage show, but the music, and his knowledge and appreciation for Johnny Cash came in handy.

“All the music in the show is live. All the actors play all the instruments and sing. It’s an interesting mix of a live rock show, and theater. It’s a very different show in that regard. Normally you have musicians, and then you have actors. But for this show they have to find people who can do both. Chuck Mead’s arrangements are fantastic. I had to learn some of the breaks, and some things that they do that were not necessarily the way I had learned the songs. But it was a lot of fun. I definitely felt like I was getting to exercise some muscles I don’t usually use. We do a couple gospel songs. There’s four and five part harmony gospel singing, so I get to do some bass harmony singing, which is a lot of fun. I’m definitely learning a lot. The whole acting thing is new to me, but I’m having fun with it.”

The Million Dollar Quartet runs shows at Chicago’s Apollo Theater Tuesday through Sunday, with two shows on Saturday and Sunday. There is another production of the play currently running in Las Vegas, and another that tours the country.