The stereotypical observation about the classic side of the country music divide is that classic fans only like music because it’s old and sounds old, and only hate the new music of today because it sounds new. But the truth of the matter is country music’s past has plenty of bad music, eras marked by disappointment and poor trends, and songs and artists that time has not been very kind to. You want to talk about the misogyny in the country music of today? Well go back and listen to some of Conway Twitty’s biggest hits. Want to talk about too much pop in country? Then give a listen to Juice Newton or Olivia Newton-John. And if you want to talk about shallow lyrics brow-beating listeners with Southern-isms, listen to some old-school Alabama.

Hank Williams Jr. had his fair share of Southern-affirming moments as well, but he would also mix in some songs that would hit you square between the eyes with an emotional-laden punch. Alabama had some of those too, but they tend to be further down the list of their top hits, if they make the list at all. If there was a precursor in country music to the shallow and simplistic model of songwriting that we see in practice today, especially the doubling up on catchy choruses at the expense of verses, Alabama may not be a bad candidate to assign the blame to. 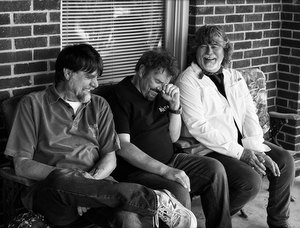 It doesn’t mean some of those old Alabama songs haven’t gone on to become classic and even iconic, or that they weren’t worlds better than what country music offers today. “Tennessee River,” “Mountain Music,” “Song of the South”—these songs are legendary. But let’s not fool ourselves into believing Alabama was a band of great substance just because they were around during the Regan Administration, or that Luke Bryan and Jason Aldean symbolize the headwaters of country music’s downward slide.

So here comes Alabama with a new album—their first original country LP in 15 years—and they start it off with the title track which is so moronic and formula-based, it’s grotesque. Sure, it’s just one song, but so was Billy Ray Cyrus’ “Achy Breaky Heart.” Cyrus had multiple songs that were great contributions to the country canon, but nobody remembers them. ‘Southern Drawl” is one of those songs that’s so bad it can ruin the experience of a whole album, or even a career.

But the title track marks the low point of the record, and the rest of the time Southern Drawl works to redeem itself, sometimes successfully, and sometimes taking further regressive steps backwards.

There’s two types of people in this world: people who are constantly moving forward, and people who are perpetually stuck in a time that they believe their lives most mattered, like Uncle Rico from Napoleon Dynamite. It might as well be 1985 on Southern Drawl, and not in a good, reminiscent, nostalgic way, but in a drabby, cheesy way, like the feeling you get when walking into an outdated laundromat, or your crazy aunt’s puke green and magic mushroom linoleum kitchen.

Who can’t get behind the message of a song like “American Farmer” that preaches about how without the boys in bib overalls, we’d all starve to death? But it’s all so direct and sappy, it’s like Lee Greenwood’s “God Bless The U.S.A.” The following song “It’s About Time” is almost scary in its dated-ness. “It’s about time, it’s about space, it’s about saving the human race,” it says. Who talks like this anymore? This is the type of stuff Millennial irony thrives on. 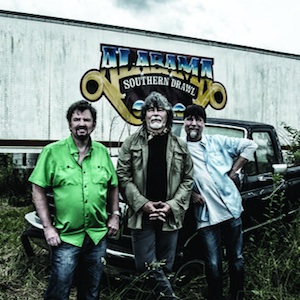 But in between cringe-worthy moments are a few songs that as forgettable as they may be, are at least innocuous. And few more that are serviceable, and some are even not half bad. “Wasn’t Through Lovin’ You Yet” is actually the moment Alabama tries to be relevant to today’s sounds and somewhat pulls it off. I could hear an artist like Dierks Bentley record a song like this and actually make it acceptable.

One of the knocks on Alabama over the years has been that many of their big songs are songs about songs. Only fitting then that Southern Drawl‘s best track is that very thing. “This Just Ain’t A Song” isn’t just a reprieve from some of the awfulness on this record, or even fair to characterize as slightly decent. “This Just Ain’t A Song” is downright good, if not great, and even if you wrote off Alabama in 1988 or would never consider touching this album after hearing the title track, a selective download of this song might be worth it.

“As Long As There’s Love” is not bad either. But then there’s the hokey “Hillbilly Wins The Lotto Money,” and the moment Southern Drawl‘s awfulness challenges even the title track—a song called “One On One,” where Randy Owen tries to pull off a Barry White impression, and falls somewhere between sad and creepy. I’m not saying there isn’t some 62-year-old divorcee with 16 cats out there that won’t flip this on while taking a bubble bath surrounded by smelly candles and slide down into hillbilly heaven with dreams of Randy Owens’ salt and pepper beard brushing up against her cheek. But man, it’s pretty unbearable.

Southern Drawl is not the problem with country music mind you. It’s just very far from the solution. Honestly, I’m not exactly sure what Alabama was hoping to accomplish here. They sell 20,000 records upon the debut, release some songs that remind certain country fans why they were only one foot in on the band in the first place, and they reinforce the theory that Alabama was a product of their time that sold a bunch records and had some hits, but really didn’t move country music forward in any measurable way during their tenure.

It would be great to see a classic country band that is name-checked so often in the songs of today’s posers come back from the dead to show them how it should be done. But instead we’re reminded why Alabama is one of the reasons country music is in this state in the first place.