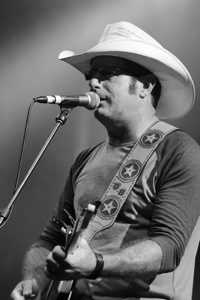 Over the last couple of years, one of the places I’ve loved to go looking for that amazing country music artist or album that few if any have heard of in the rest of the world, but is exactly the type of true country music the whole world craves, is in the land Down Under. There’s many great Australian artists we already know about in the United States like Kasey Chambers, but I’m talking about guys like Roo Arcus who I discovered last year, or Tammy Neilson in neighboring New Zealand—artists who totally blow you away as soon as you push play, and are only unknown to you due to country of origin.

Australia has such a rich cowboy culture of farming and ranching, and plenty of wild frontier, it’s second to only to the United States when it comes to finding people who live it first, and then sing about it later. But with Australian country singer Doug Bruce, you get the best of both worlds. Born in Aubrey, TX into a musical family, Bruce spent much of his early adult life as a drummer in country bands touring Texas and beyond, including in a band called Cheyenne, playing venues like Billy Bob’s Texas, and opening for acts like Jerry Jeff Walker, Charlie Robison.

Doug also worked as a session drummer and a background vocalist, setting the stage for him to come out from behind the drums and sing his own songs. Doug eventually moved to Nashville to be a songwriter, and began performing with a new group of musicians like Billy Yates, and found the opportunity to play the Grand Ole Opry a couple of times.

Along with his 20 years of playing country music in Texas and beyond, Doug Bruce came from a strong country music pedigree. Doug’s father Dale was a rhythm section player as well, handling bass duties for Red Stegall and Johnny Duncan. And Doug’s uncle Buddy Bruce was a songwriter who landed cuts with the likes of Minnie Pearl and Red Sovine, and recorded for Starday.

It’s uncle Buddy that inspired Doug Bruce’s new record, even though Buddy’s heyday was a half century ago, and seven years ago Doug moved to Bendigo, Australia to be with his wife who he met in Nashville. Despite the distance between his past and current musical life, Doug has done his best to build a country music career in Aussie Land, and has been decorated with numerous awards from the Australian country music industry, even finding play on Australian country radio.

Though most of Doug’s records contain a slightly more contemporary style of traditional country, his new record Unsung: A Tribute to the Songs of Buddy Bruce is all about reawakening the classic country sound, and setting it to a selection of his uncle’s tunes. 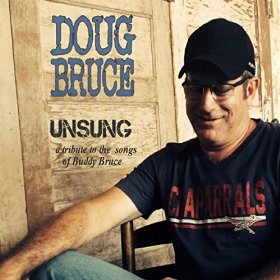 Unsung is no vanity project meant as something to be passed out at the next family gathering; far from it. Think of this album more like a time capsule that has been unearthed with some of the best music written during the golden age of country that never saw the light of day, so it’s still fresh and new to your ears. And by going through his uncle’s entire song catalog to find the best selections, it’s like a Greatest Hits collection from some long lost legend at the same time. Put an absolutely stellar band and perfect arrangements behind all of this, and all of a sudden you have an astounding country music album that is both incredibly fresh, yet entirely classic.

You come for the music, which is lavished with steel guitar and twang and traditional country tones in a perfect representation of the material, but you stay for the songwriting. It’s unreal how songs like “The Tears” and “Greatest Expert” were never super hits back in their day, and quite frankly I’m not sure songs like these could be written by modern songwriters even if they tried. It takes the perspective of the 50’s and 60’s to pen such authentic country sentiments, yet I can’t stress enough the magic in this music since you’ve never heard it before. It’s like hearing Hank Williams again for the first time.

And Doug Bruce turned out to be the perfect candidate to interpret this music to the modern world, not just because he could bring love to it from the familial relationship, but living in Australia might actually give him a better perspective on American country music than most. It’s like how Loretta Lynn had to move to Washington State to see the beauty of Butcher Holler. Only by living in a foreign place could she look back on her home fondly and with longing in her heart, and sing about her experiences to the rest of the world. In the same way, Doug Bruce is taking the songs of his uncle, and using it to create a piece of home in his heart. And how lucky we all are that he decided to share it with the rest of us.

One of the issues with traditional country is that it can sound tired after you hear the same songs, or the same approach over and over. But Unsung solves that issue. It’s got a little bit of everything, with the Western swing feel of “Help The New Family Move In,” to the balladry of “Lie To Me,” and the honky-tonk heart of “The Tears.” Yet Doug also figured out how to slide in some slightly new and interesting compositions in with songs like “Nothin’ Yet,” and the strange chords of “Change Your Tune.” Though the material is old and from a certain era, Unsung offers incredible variety and never feels boring., and the stripped-down final track “Night Before The Morning After Game” might be the funnest of them all.

There’s heartbreaks, there’s happiness, there’s a by gone sense of home and community, and overall there’s just some excellent country music that has gone “unsung” for too long and shouldn’t be confined by international borders.

Purchase Unsung: A Tribute to the Songs of Buddy Bruce from Doug Bruce