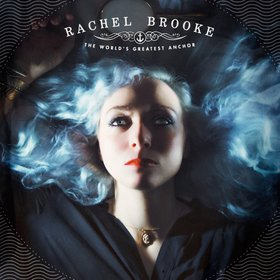 Don’t think of this as a music album per se. If you approach it as such, you’re apt to be disappointed. Think of it more like a small and thin pocket-sized book of poetry with just a few simple entries, similar to the style of poetry book that hasn’t been printed for many many years, and you may find when rifling through some older relative’s possessions after they’ve passed, or perhaps at an estate sale where it’s left in the drawer of some small table carelessly forgotten that smells like your grandmother’s house when you open it.

In this age of possession and information ubiquity, a tiny book of words with a simple illustration for a cover may seem so void of purpose. But when you open it, it’s the scarcity of the material it contains, and it’s by-gone reverence for the art of words that makes it so precious. Not only are there so few sheets of paper sitting between two faded and tattered covers, but so little words filling each page. Yet it’s the conservation of words and the excess of space that make the poetry come alive and the words sing to you, and give them such indomitable weight you can’t help but give them your rapt attention, and utmost pondering.

An album like this reminds us of how much we are all missing every day in modern life; how lavishness has diluted the value of everything, and the quick tempo of life makes us miss the most precious moments. In bygone eras, the only entertainment entire households may posses would be one or two books of poetry, or perhaps a songbook, elevating such things almost as implements of magic, and gateways to the imagination.

Taking songs written by her husband Brooks Robbins, Rachel Brooke compiles five simple pieces of written word adapted to song by way of her guitar and voice. Rachel has released multiple full-length albums herself, and has equaled that output in collaborative efforts with Lonesome Wyatt of Those Poor Bastards, and husband Brooks Robbins in various projects. No offense to Rachel’s solo efforts, but it’s in collaboration with others where her gifts are the most greatly defined, and when she strips down her music to just her and her guitar. That makes this quick and admittedly fey project, The World’s Greatest Anchor, and ideal vessel to allow Rachel to impress.

Rachel’s voice remains her most virtuous gift to music, and it blossoms in this mostly naked forum. Some of the entries of The World’s Greatest Anchor are scarcely a minute long, more like snippets of ideas than songs, including a couple that end quite abruptly. It was meant to be something special for dedicated fans, to tide them over until she releases an upcoming album with husband Brooks called Modern Mal. But she struck a bit of genius here, however brief. Ideally, it could have used just one or two more entries to find slightly greater reception and interest, but try and stretch this simple approach out into a full-length and it would have been exposed.

Many will not get this, but it’s not meant for them anyway. Others who will heed the lessons and take the advice of The World’s Greatest Anchor to slow down and cherish moments, and appreciate the white spaces and bits of story life bestows, however abruptly short-lived they may be in the modern age.

Purchase on Vinyl from Rachel Brooke