It’s the role of music reviews to guide the listener into making informed decisions about what to spend their time and money on, and perhaps to give some greater context to the music. This duty will be executed in accordance with custom and norm for Good Old Fashioned Pain, but 30 seconds into this record, you already know you’ve hit on country gold, and nothing more needs to be said. When you call yourself a country fan, this is the kind of country you mean. When you tell people about what they’re missing by only listening to corporate radio, this is the kind of music you play for them. When you listen to a record like Good Old Fashioned Pain, all the gratuitous and silly concerns about the direction of country music, or even the worries of your own life fade away in a sea of country music bliss.

Originally from Flowery Branch, Georgia, Taylor Alexander’s father was an opera singer and a church music minister, and music was billowing throughout his household. He received his first guitar at the age of 7, and started playing in rock bands by the time he was 14. His curse for performing country music was cast at 17 when he fell headlong into the music of Hank Williams, George Jones, and Bob Dylan, and started an alt-country band called Young America. 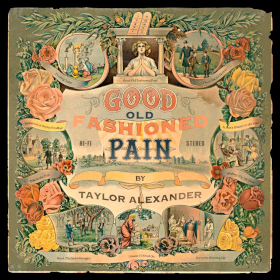 Though the name might be new to you, Taylor Alexander has experienced a brush with national fame in the past. In 2017 he competed on The Voice, and blew many people’s minds with a twangy, traditional country version of Cher’s “Believe.” As unusual as it sounds, it was the right combination of true country and pop familiarity to get accepted, though his run on the show was short, and he exited after the 2nd round. This might have been good fortune for Alexander though, since success on The Voice assures you nothing, or if anything preordains your struggle to actually make it in professional music. The opportunity gave Alexander some experience, but did not typecast him. He subsequently returned to Nashville and began pursuing his country music dream on his terms, and the result is Good Old Fashioned Pain.

This record refuses to let you down. The songwriting is like the resuscitation of one timeless classic country theme after another, only even more smartly written from dedicate study of the medium, and sculpted to fit Taylor Alexander’s specific story. The record is about a struggling musician attempting to make a dream real, and having to live with the sacrifices of living on the road, getting by with less, trying to hold onto love, all while trying to stay focused and believing in one’s self. In one song after another, Alexander’s stories become allegorical troughs of wisdom, delivered in simple and relatable expressions, while his spirit and perseverance feel palpable, and result in an inspiring listen.

Beyond the writing, Alexander shows off cunning skill and talent with emotion and pentameter with the way he sings these personal stories in perfect relation with the weighty moments they hope to convey. This is how Alexander was able to take a dance song by Cher and make it sound like something from Randy Travis, and make it feel even more personal and devastating than the original. You actually hear the words and the meaning behind them, not just the music.

And for the music of Good Old Fashioned Pain, Taylor Alexander went all out to make it the traditional country record he heard in his mind, yet it includes a kinetic energy to it as opposed to the same old phrase turns and guitar licks that work, but don’t render the music fresh. The songs of Good Old Fashioned Pain are everything you want, but it immediately leave you craving more.

Completely unsigned and looking for a shot at the dream, Taylor Alexander and Good Old Fashioned Pain make as good a case as any for being foisted right to the front of the line from the talent, heart, and authenticity exhibited. Don’t be surprised if this is a title that makes it to eventual consideration right beside the small handful of others as one of 2019’s best.