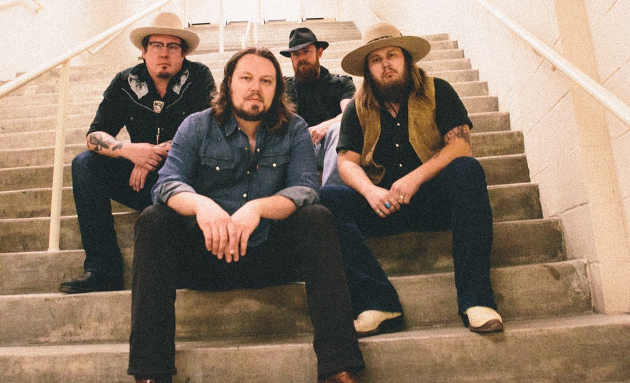 “…and then the Southern Rock Gods bestowed the music of The Steel Woods upon the famished and huddled masses traversing the barren, parched desert that was modern music, and it washed over them in waves of twang, sustain, and distortion, bestowing plentiful bounties of Southern harmonies upon their bosom, and speaking straight to their hearts with poetic psalms that cleansed their souls and lifted their spirits. And they were sated.”

The Steel Woods have arrived ladies and gentlemen, and with them a whole new legacy of Southern rock to enjoy in the present tense, and look forward to for the foreseeable future. The band’s first album Straw in the Wind smartly took the Southern rock template, modernized it, and put a signature stamp on it by bringing a metal attitude to the music, and texturing the songs with dark chords and themes that could chill you to the bone. But you also got these sense that this was a project still trying to find its footing and could have used a little variety. It was manned by accomplished artists from other projects moving forward with a solid concept, but they were still feeling themselves and each other out, and interested to see how their unique brew of music might be received by the public.

With Old News, they lay it all to bear, leave nothing to chance, throw out their best shots, and scream for rightful consideration right beside bands like Blackberry Smoke and Whiskey Myers as the best Southern Rock the here and now has to offer. 15 tracks go from pure Southern rock, to stripped down country, to country metal hybrids, and a bunch of covers that are hard to quit hitting repeat on, and that all come together for what will go down as a career-defining record.

Deciding to launch a modern-day Southern rock band isn’t as easy as just procuring a Marshall stack, a second-hand bass and drum rig, and ripping into some modified Skynyrd riffs. If you don’t watch out, you’ll come across as out-of-style as your whiskey-nosed uncle living on the edge of town who’s still rocking the 1987 Trans Am and atomic mullet. Screaming eagle decals and mud flap girls may still have their place in society, but go too far and you’ll sound like a bad version of Molly Hatchet. 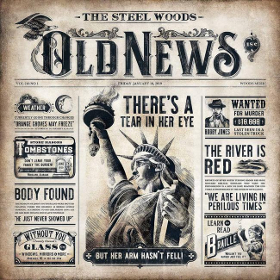 But The Steel Woods know what they’re doing here, bringing both wisdom and experience, yet a youthful hunger and attitude to the enterprise. Just the second song into Old News called “Without You,” you’re immediately put on alert that this record won’t exclusively lean on the superb guitar work of Jason “Rowdy” Cope known for playing behind Jamey Johnson, or the soulful Southern tones of lead singer Wes Bayliss. You may come for the chest thumping Southern rock, but you’ll stay for the songwriting. Before another word is spoken, just understand that “Wherever You Are” from this record is a bona fide Song of the Year candidate come 11 months from now. Writing a love song to someone you’ve never met, but hope to in the future is a master stroke of the songwriter’s pen, and could work just as well for a lonely man as a widowed woman, or a child-less adult.

Old News is steeped in the past and reflective, but in a wise way, avoiding the clichés that can beset the subgenre, and steering away from polarizing subject matter. The song “Old News” might be a little too anthemic for some, but that doesn’t mean the writing is any less powerful, intelligent, and incredibly timely. And though the majority of this music is Southern rock, in the true Southern rock tradition, they include a couple of outright country songs. “Anna Lee” helps keep this record grounded in the roots, while a song like “Rock That Says My Name” is as well-written as many of your favorite country songs.

It’s fair to ask if so much cover material was necessary on an album like this. You have Black Sabbath’s “Changes” and Tom Petty’s “Southern Accents.” You have Merle Haggard’s “Are The Good Times Really Over” and The Allman Brothers’ “Whipping Post.” But once the opening bass thumps of “Whipping Post” hit your ears and the guitars start screaming, you would take offense if this track was left off as you turn into a kid again and find yourself standing precariously on the back of the living room couch playing air guitar with a Swiffer mop while dinner burns in the kitchen.

The Steel Woods find the soulful blues song at the heart of Sabbath’s “Changes,” and listening to their version of Petty’s “Southern Accents,” you realize things about the song that you’d never understood before. Covering Townes Van Zandt’s “The Catfish Song” is another good call, and there can never be enough Wayne Mills covers floating out there like “One Of These Days.”

Old News gives you a lot to chew on, and though it’s difficult to question any track, being a bit more austere might have meant more attention for its most potent moments. But you may need to invest in the double vinyl version of this album and hold it in your hands to really understand this album’s scope and impact. They included a lot of covers as both an homage to the past, and because they blew them all out of the water, and couldn’t whittle them down. This isn’t just a run-of-the-mill sophomore release from an up-and-coming band. The Steel Woods set out to press a Southern Rock opus with Old News, and though it’s always prudent to sit on such lofty proclamations until time has made its own determinations on an effort, this record is certainly a candidate for such an “opus” distinction.

Don’t worry Southern rockers, the future is in good hands. The Steel Woods are here.