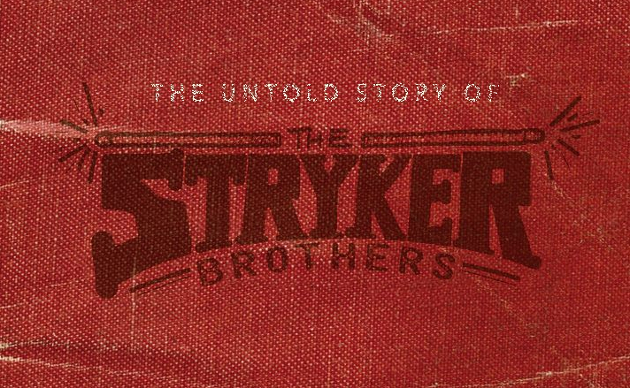 Who are the mysterious Stryker Brothers? And are we to believe the elaborate back story about a couple of singing brothers named Coal and Flynt from the 70’s who hobnobbed with the Texas Outlaws of the era and other country music royalty, only to die in a prison fire and have tapes of their music discovered after all of these years? Give the duo an ‘A’ for effort, and for roping folks like Bruce Robison, Shooter Jennings, and former astronaut Charlie Duke into the ruse as well. But the ultimate entertainment value of the Stryker Brothers is their music, and the performance art aspect of their back story, not any true mystery.

The problem with trying to perpetrate the Stryker Brothers mythos too far is that the country fans down in Texas and beyond are just too damn smart, and too damn loyal to not notice the voices of their favorite singers straight off the bat. These voices have helped get them through the hardest of times, been playing in the background during their fondest memories, and fit like a glove around their soul. So it didn’t take long for the public to finger Randy Rogers and Robert Earl Keen as the names behind these masked men, though the initial mystery was appreciated as an extra effort in the often predictable and ordinary cycle of album releases to keep things interesting.

Folks putting clues together—like the fact that Randy Rogers has performed “Ft. Worth Was a Fabulous Waste of Time” live before, or that he lives down the street from astronaut Charlie Duke—made the run up to this release a little more fun for hardcore fans, like an Easter egg hunt for adults. And appreciate neither artist has tipped their cap publicly to their participation in this project as of yet, which can’t be helping their pocketbook. This takes a level of commitment most artists couldn’t accomplish. Secrets love to be told, and artists love attention.

Also, it’s been seven years since Robert Earl Keen released a record of original music. He said around the release of 2015’s Happy Prisoner: The Bluegrass Sessions that he’d become bored with the whole “write songs, releases songs” cycle of the business. Sometimes we forget to think of artists as people too, who can get tired of all the repetition. The Stryker Brothers is a way for Robert Earl Keen to keep things spicy for himself, and collaborate with a fellow musician and friend. 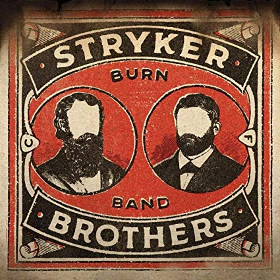 Burn Band is not a screw off project by any stretch though, despite the silly back story and incognito nature of the participants, and the levity involved in the opening song about astronaut Charlie Duke taking country music to the moon (which is a true story). There’s a few other lighthearted moments on the record, but overall Burn Band is an album combining some of the best new material from two legendary songwriters down in Texas, and is solidly country for most of the journey, even though both Keen and Rogers have been slightly to the left or right of country for most of their careers.

Being Robert Earl Keen and Randy Rogers is both a blessing, and a curse. At this point, they could both just coast off of their previous output, and still pack houses. But shows from these two guys come with expectations to play the same hits they’ve played a thousand times before. There is also an expectancy about the style of music fans show up to hear, especially from Randy Rogers. Some in the traditional country and Americana realm like to criticize Randy for lacking roots and substance in some of his full band material. But when he paired up with Wade Bowen in a similar project to The Stryker Brothers called Hold My Beer Vol. 1, we saw Rogers was still very much capable of penning a country song, and delivering it with conviction and twang.

Randy Rogers does it again on Burn Band, and does it multiple times. After all the speculation and sideshows to the Stryker Brothers introduction, songs like “Wrong Time,” “Quiet Town,” “Blue Today Baby,” and other Rogers-led tunes are just incredible efforts of slow country heartbreaking greatness that coldcock you when you’re least expecting it. Just like with Hold My Beer Vol. 1, you almost feel like it’s a shame such great material is being relegated to a side project, even though it also seems to make it more sweet and meaningful because you know it was hand selected for you—the dedicated fan, and trusted to word-of-mouth and good will to find its audience.

Robert Earl Keen’s contributions to the record are more served with a shit-eating grin, in a good way of course. Keen’s songs are more what you would expect from looking at the cover and reading up The Stryker Brothers concept—like he’s the crazy sibling of the two—while the Randy Rogers-led songs feel like the hard country material he didn’t want to include on the next Randy Rogers Band record. Though Burn Band is certainly conceptualized, the music feels very much like either Robert or Randy taking the lead, and the other singing harmony instead of a more integrated, seamless collaboration.

Without the benefit of name recognition or social media reach, The Stryker Brothers’ Burn Band will be one of those records you’ll have to discover on your own, or find via word-of-mouth, which often can result in the some of the best listening experiences devoid of expectations or preconceived notions. It’s one of those records you mention to a friend who says they like Randy or Robert, and they respond, “Really? I’ve never heard of that.”

And instead of being worn out on radio and ruined by media, you get to experience the music on your own terms. It’s a little gift that often becomes more legendary than the sum of its parts as the back story becomes a sermon people recite, get wrong, embellish, and turn into their own incarnation while perched on bar stools. And overall it enhances your opinion about Randy Rogers and Robert Earl Keen because like few other things, it proves they’re just Joes like the rest of us that like to screw around, pick a few tunes, and have a little fun. But ultimately, it’s still all about the music, and despite the silliness and elaborate backstory, the music of The Stryker Brothers remains serious business.