Studies show that most people fear running out of money even more than they fear death itself. It must be something that was ingrained in humans during evolution to make sure we kept thinking about where our next meal would come from. Even today when true starvation is not an issue for most Americans, the fear that the bottom could fall out from under us—even by many of us that are otherwise perfectly well off—always looms in the back of our minds.

This fear is even more palpable for the people in rural areas where wealth is scarce and the cycles of boom and bust have produced generational concerns of how you can lose it all at a moment’s notice. The factories that brought jobs when the agrarian economy dissolved weren’t any more stable with their perpetual pink slip rumors and threats to move overseas, and then the almost the inevitable shutting down as the economy shifts away from a local community’s proud commodity, leaving shells of abandoned hometowns strewn across the forgotten middle of the continent like wilted pumpkin rinds.

Country music has always been the voice of the working people, no matter where those working people may dwell. Whether the fears are rational or not, the burdens the working class carries throughout their lives—worried if they’ll be able to provide for themselves and their families—are so biologically programmed and perennially top-of-mind, they can dominate their every thought to the point of corrosiveness. That’s where country music comes in to commiserate with the working man’s fears, and let them know they’re not alone in both their burdens and concerns. 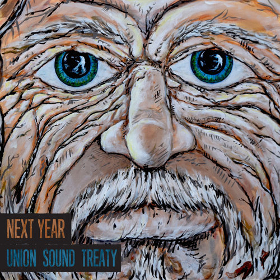 West Virginia is as good a place as any to find huddled masses of hard working folks who are constantly facing down hard times, or having to work jobs many of us would not wish on our worst enemies. Union Sound Treaty from Morgantown speaks to those burdens and fears better than most in their debut album called Next Year—titled for the eternal hope that smolders in the hearts of many laborers that the future will be better than the present despite the constant dousing of that flame by the daily disappointment of a despondent life.

Built around the incredible voice of singer and songwriter Charles Godwin, Union Sound Treaty puts rhythm, melody, and words to the fears of the working man in songs like “Blow Me Away” and “Getting By on Dimes,” while keeping away from the cliche’s of the subject that make some country come across as recycled and stale. But what really puts these guys and Next Year on another level is how they illustrate the nexus between the working man blues and country music that speaks to them. It’s songs like “Needle Fall Down,” and “Sad Country Standards” that evoke not just your empathy for the working man, but your love of country songs at the same time, while Godwin’s vocals find what seems to be the perfect melody to drive home the message.

Next Year is not all about bad times for the working man though. It starts off with a murder ballad, and “Peaked” in the middle of the record adds a little humor in an otherwise heartbreaking effort. Enough can’t be said about Charles Godwin’s vocals here, and the efforts of the rest of the band—Ross Justice on drums, Shawn Wilhelm on bass, and guitar player John Schooley. But this does feel like a rookie effort in some respects, in both bad and good ways. The album could use a bit more spice and diversity in structures and arrangements. Though each song isolated holds little to anything to complain about, after 10 songs with very similar arrangements, they all begin to blend together.

Yet with Next Year you also feel like you’re listening to a record of a band that is only going to continue to get better, and you’ll be listening to them and Charles Godwin for years to come. These guys have a bead on what really resonates in country music with listeners. They just need a little help when it comes to making each song its own expression, and then watch out.