Yodeling is one of the great lost arts in modern country music. As much as country elements like the steel guitar and fiddle are under siege, yodeling is something even more endangered of going extinct if for no other reason than most modern country singers are just not skilled enough to do it, especially with the confidence and control it takes to master the acrobatic vocal maneuver in a way that mimics the pining of the human heart that only the yodel can accurately convey in sound and feeling.

Singer and songwriter Alice Wallace from Southern California has been one of the best yodel masters out there touring for the last few years, but it is something she primarily features at the end of her shows, almost as an interesting and memorable conclusion to her sets for people to remember her by beyond her original music. So few can do it with such similar adeptness and ease, it has become her signature.

But the challenge is to work it into her music. Often skilled singers add a couple of moments where they transition to falsetto and back, but to truly yodel in a present-day country song is quite a challenge, and fairly bold since it could be heard as olden, or even polarizing. Remember, it was the premise of the movie Mars Attacks that Slim Whitman’s yodel was the undoing of the Martians. Let’s just say that not everyone has a sincere appreciation for the yodeling art form. 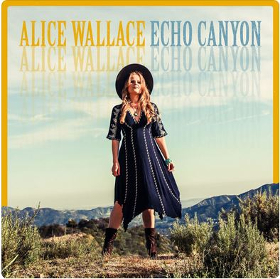 But that’s what’s so great about the new Alice Wallace song, “Echo Canyon.” One of the biggest challenges for songwriters is to write to their vocal strengths, or even challenge themselves by pushing to the edges of their range and capabilites, and out of their comfort zone into places that sometimes the strain helps pull the emotion out of a lyric, and take a performance from marginal to memorable.

Co-written with Andrew Delaney, “Echo Canyon” creates the perfect setting and environment for Alice Wallace to showcase why she’s one of the most unheralded singers in independent country/Americana. The yodel immediately evokes the expanse of the West, and the loneliness of the desert-scape like nothing else can.

“Andrew had mentioned to me that he’d always wanted to write a song about yodeling in a canyon, but he had never known a singer who could sing the yodels,” says Wallace. “So we started brainstorming ideas about yodeling in a canyon—namely, why would one be yodeling in a canyon? The story we came up with is a dark one, and for the yodeling section, I wanted to bring attention to how much a yodel can sound like the yips and cries of a coyote. After spending so much time touring the southwest the past few years, it has become familiar territory and it was so much fun to create a song with that brings to life that atmosphere of the rural southwest.”

The production of “Echo Canyon” is also superb, with its percussive dressing and tasty lead guitar tones. And as soaring as Alice Wallace’s vocal performance is on “Echo Canyon,” especially when she starts to hit the high notes in the 3rd chorus, it’s nothing compared to seeing Alice Wallace perform live—something folks will be able to do at AmericanaFest in Nashville come mid September.

“Echo Canyon” is the first single from Wallace’s upcoming new album, and can be purchased on iTunes. She plays her official AmericanaFest showcase Wednesday, Sept 13th at 11 p.m at The 5 Spot, as well as The California Country Social at Fond Object on Thursday at 7 p.m.