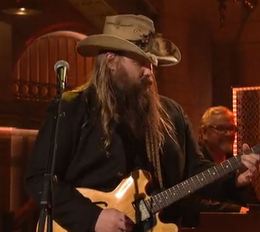 Chris Stapleton got another crack at a national audience on Saturday, January 16th when he took the Saturday Night Live stage, but after the NFL matchup between the Green Bay Packers and Arizona Cardinals ran 45 minutes later than normal, some were worried Stapleton’s opportunity would be scuttled. However according to television ratings, the opposite was the case. The drama-filled Packers/Cardinals game got folks tuning in, and they stuck around for the SNL episode hosted by Star Wars actor Adam Driver.

According to THR, the Saturday Night Live broadcast pulled the best ratings in two years among adults 18 to 49—one of the most coveted media demographics. It scored 3.0 rating and 15 share. Donald Trump’s appearance on SNL in November actually did better overall numbers, but not as good as the Stapleton/Driver episode among the key demo.

One person who stayed up late to to watch Chris Stapleton was the cantankerous, and curmudgeon-at-large music critic and pontificator Bob Lefsetz. Known for being able to find the wrong in anything and reducing the most crowning achievements to crumbles, Lefsetz was downright smitten with Stapleton’s SNL performance.

“This is not SNL, but something blasted in from a prior generation, when the music was paramount and image was secondary, when carrying a few extra pounds was not anathema, when how you played was a demonstration of your expertise and value, not how many likes and views you’d accumulated,” Lefsetz said. “This hearkens back to an era so long gone that I don’t think anybody watching the show understood what they were seeing, but they GOT IT!”

“‘Traveller’ is subtle and dare I say it”¦at first not great. It’s good. But today that’s not good enough, when we’re surrounded by the history of recorded music. And then you let it play and the album takes a left turn, just when you feel superior to the critics you become riveted, the deeper you go the more passion and desperation that is evidenced, and you’re closed … And if you listen to the second half of ‘Traveller’ you won’t be able to stop. And if you allow yourself to extricate yourself from the rat race and let it all wash over you”¦ You’ll have hope.”

Though Stapleton still has to be considered a dark horse for February’s Grammy Awards, he’s racked up more high-profile appearances and endorsements during the voting period than the other nominees for Album of the Year. Along with his continued success with sales numbers, his moniker of the “Adele of Country Music” for his remarkable rise is beginning to stick.

Chris Stapleton is currently project to have the #1 album in country yet again next week.