We live in a charmed time in music where if all you want to listen to is the throwback, neo-traditional sounds of artists like Wayne “The Train” Hancock, Lucky Tubb, BR549, and early Hank Williams III, then you can bury your nose deep in the internet and find darn near enough bands of that style that you don’t have to listen to anything else. And if you’re one of those country throwback types that prefers the drums be replaced with the slap of an upright bass while the lonesome sounds of swinging country blues fills your ears, Danny Kay and the Nighlifers can quench that rumble deep in your old school country music gut. 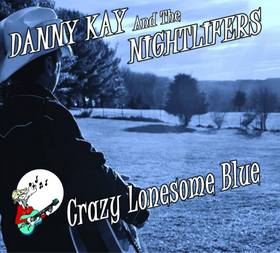 Crazy Lonesome Blue comes at you with no frills, offering up a bevy of original songs, a few covers and traditionals, and an all-star cast comprising the Nightlifer’s lineup. It’d take a DNA test to convince me that Danny Kay isn’t a cousin of Lucky Tubb in the way his lonesome drawl with a rounded cadence really pulls the emotion out of the words to a song while pulling the listener’s ear right in. After laying down the foundation and setting the story of the song, Danny’s gets out of the way and lets the hillbilly maestros in the Nighlifers do their handiwork.

It starts off with blazing lead guitarist Zach Sweeney from both Wayne Hancock’s and Lucky Tubb’s touring bands laying down some of the sickest, most tasteful leads you can find in country music. I’ve said it before, and I’ll say it again about Sweeny—he is a guitar-playing superstar of independent country, and deserves to get way more buzz and recognition. Then comes Liz Sloan (also in Jayke Orvis’s “Broken Band”) who matches Sweeny note for note for style and taste, while her beau and fellow Broken Band member Jared McGovern slaps out a dizzying bed of bass notes.

And Danny Kay is willing to share the spotlight with his Nightlifers. Crazy Lonesome Blue offers up two instrumental tracks, including “Urban Pioneer” that was penned by his sidemen. Dustin Delage offers some minimal, tasteful drums on a few tracks, and Mark Whiskey handles backing vocals.

Standout tracks for this listener were the aforementioned instrumental “Urban Pioneer,” “Heart of a Fool,” “Nothing’s Wrong (But There Sure Ain’t Nothing Right)” and the fun “Must Have Been Drunk.”

While listening to Crazy Lonesome Blue, you get the sense that acts like BR549 and Wayne Hancock are the teachers, while Danny Kay is still the student, but Danny Kay would probably tell you just as much himself. Nonetheless there’s not a bad track on this album, and it’s good to see new blood make their voice heard in the neo-traditional ranks.

Learn how to get your song on itunes at ReverbNation.com
© 2021 Saving Country Music
0