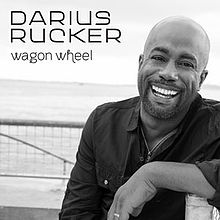 “Wagon Wheel” is the long-suffering country music tune that started as a chorus from a Bob Dylan demo that was in turn fleshed out by Ketch Secor of Old Crow Medicine Show and released on their 2004 Major label debut album O.C.M.S. Despite little or no radio play, the Old Crow version was certified gold from its cult following amongst independent music fans. Then Darius Rurcker cut a version of the song on his 2013 album True Believers that has since been certified platinum.

Darius Rucker made the comments during an interview with sports personality Dan Patrick.

Why exactly country music is “screwed” if the song is not nominated was not elaborated upon by Rucker. Though the comments were made in a somewhat jocular moment with Dan Patrick, Rucker did repeat himself, and emphasize “I really believe that.” Whether Rucker is perceiving some bias or even racism, or if it is a somewhat subtle jab at the recent direction of country and specifically its male performers and their flight from substance is hard to determine.

The appeal of “Wagon Wheel” amongst country music fans of all stripes is hard to deny from its commercial success in multiple realms. But its propensity to be overplayed and blurted out as a request by inebriated fans has dubbed it the “Free Bird” of our generation. Rucker said he initially “didn’t really get” the song until he saw a school performance with his daughter that included it. The song was nominated for both Single of the Year and Song of the Year at the CMA Awards held last week, but did not win either category.

Rucker’s comments can be heard at the 9-minute mark.