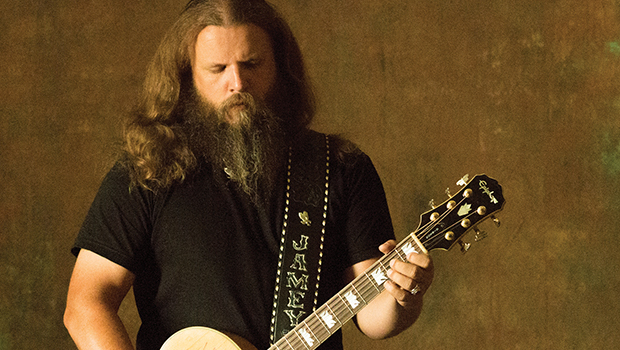 Jamey Johnson pulled his band into Bismarck, North Dakota on July 24th for a show at the city’s historic Belle Mehus Auditorium, and then decided to pull his belt off to teach a lesson to a few unruly concertgoers about halfway through his performance. According to witnesses who spoke to Saving Country Music, two male individuals on the front row of the 100-year-old seated theater started causing a commotion as soon as the show started. It would end with the Grammy-nominated, and 2-time CMA Award-winning Jamey Johnson running them off the stage and out of the building, belt in hand.

“From the moments the doors were opened, they were already tuned up, screaming and hollering pretty much during every song,” one eyewitness tells Saving Country Music about the unruly fans, who were seated just left of stage center in the first row. Kelsey Waldon opened the show, and was the first to have to deal with their disorderly conduct. “They kept yelling out ‘Pam Tillis!’ the whole time she was playing.”

After Kelsey’s set, Jamey Johnson took the stage, and about halfway through his show, and just after finishing one of his signature songs “In Color,” he called the two individuals up on stage, coaxing them to climb up the 5-foot riser. Since there were no stairs, the two individuals had to belly flop up onto the stage, and once they made it to their feet, they started shouting and waving their arms in victory, not noticing that Jamey Johnson has set his guitar down, and taken his belt off.

“They start walking towards Jamey, and then Jamey just came over, belt swinging, yelling at them something along the lines of ‘Shut the fuck up!'” says an eyewitness. “He smacked one guy. For lack of a better illustration, it was like mom kicking kids out of the kitchen. Security hadn’t even made it up on stage at that point. It was a pretty fast-moving situation. Those dudes were off the stage pretty dang fast, ran back up the aisle, and were out of there.”

It’s probably worth noting that Jamey Johnson is a Marine veteran, and a pretty stout individual.

The Jamey Johnson crowd was said to be a little more rowdy for the regular performances at the Belle Mehus according to concertgoers, and multiple other individuals were kicked out of the venue during the performance. As for how the crowd reacted to the belt-whipping incident, “It was kind of 50/50,” says one witness. “There was people cheering, and there were people that were looking around going, ‘What the hell just happened?'”

Add it to a list of recent incidents involving Jamey Johnson taking a stand at one of his concerts. In July of 2017, Johnson refused to walk through a metal detector at a show in at the House of Blues in Myrtle Beach, South Carolina, resulting in the show being canceled. Johnson also took a stand at the Tumbleweed Music Festival a week later after he saw an attendee waving a “Blue Line Flag” meant to honor fallen police officers. Mistaking it as a protest flag, Jamey Johnson shouted down the owners.

There doesn’t appear to have been any arrests or further issues tied with the incident at the Belle Mehus in Bismarck, and no video of the incident has surfaced so far.