Joe Walsh Twists Off on the State of Music Today 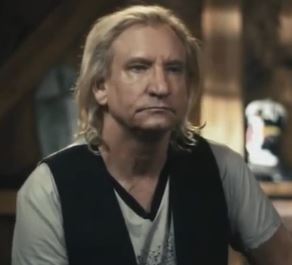 During the back half of the oughts, regardless of what you thought about the quality of mainstream country music, one thing you had to give the genre credit for was being the last bastion of guitar-based and instrument-based music that relied on humans and not electronic accoutrements to accomplish. As one of America’s most traditional genres, drum machines, purposely Auto-tuned lyrics, and other such elements were treated with a very negative stigma, and stayed mostly buried on the fringes of the genre in experimental projects.

But now as rap and Electronic Dance Music (EDM) have become very influential in popular country. They are almost required to have a hit song. Some will argue this is all part of music evolution. Though rap, Electronic Dance Music, and other electronic-based music certainly has its place in the world, the question is if that place is country music.

So to illustrate why country should be careful in how far it relies on 1’s and 0’s to carry the weight of there genre, here’s Joe Walsh—former frontman of The James Gang, guitar player for The Eagles, and solo rock performer—-someone on the outside looking in to country, and what he feels about electronic music, and the sate of music in general, taken from a recent appearance on Live At Daryl’s House.

Records, record stores, record sales, it’s all gone. And it’s up to the young musicians to try and figure it out. There’s no money in it, no record companies. It’s free, you can download it. Nobody gets paid, so they can’t afford to make music. That’s what’s happening.

And they’re just cranking out music that is just a recipe. You know, nobody is playing at the same time. Everybody’s adding on virtual instruments that don’t exist on to a drum machine that somebody programmed. And you can tell in the music that’s out now. It’s all been programmed. There’s no mojo. There’s nobody testifying. There’s not the magic of a human performance, which is never perfect. And the magic of a human performance is what we all know and love in the old records, by the way they were made. And it’s all gone.

So we’ll see what the digital age has in store.