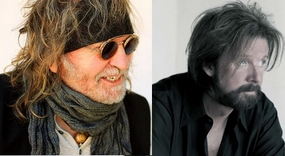 It may seem like an oddball pairing on the outside. Ray Wylie Hubbard, the wily, enigmatic and cryptic Texas songwriting god that goes by handles as far ranging as “The Forgotten Outlaw” and “Wylie Lama”–and Ronnie Dunn, one half of the Brooks & Dunn super pairing that sold over 30 million records and won more music awards than any other act in country music history before disbanding in 2010.

Then again, Ronnie and Ray have the same Texas/Oklahoma upbringing and lineage. Ronnie spent years running around the Texoma region, from getting kicked out of Abeline Christian University for playing in bands, to playing the honky tonk circuit in Tulsa, OK before Brooks & Dunn. It’s not hard to imagine Ronnie rubbing elbows with Ray at some point, and finding it hard to forget his prowess with the pen even after all these years.

On September 9th, Ronnie Dunn posted on his Facebook wall, “Ray Wylie Hubbard (Redneck Mother) is flying in tomorrow to write…. (love his new cd Grifter’s Hymnal”)…his song SNAKE FARM is a favorite here at CAMP WACO ! RD.” Two days later, Ronnie wrote, “Sittin’ at the dinner table with with Ray Wylie Hubbard. Good day of writin’ dang fun country songs. May have to go to Austin and make him feed me for a few days and record some of ’em soon. Cool day. RD.”

Lo and behold Ronnie Dunn did end up in Austin where he’s been for the last few days, recording with Ray, and an all-star band of George Reiff, Rick Richards, Ian McLagan from Faces, Brad Rice formerly of Son Volt, and others. “Started recording in Austin yesterday,” Ronnie Dunn posted on Facebook. “TEXAS boys ripped it up !! Brad Rice, George Reiff, Ray Wylie Hubbard, Ian McLagan (Faces)….this is where the Rolling Stones ride with the Cowboys !!!! If you like your country raw and with a razor edged jangle….I found the ‘honey hole’ RD.”

Meanwhile Ray Wylie Hubbard took to his Twitter account to voice his excitement and post a wavy picture of the troop at a restaurant. “Ronnie Dunn recorded 4 songs we wrote…yep. believe it.”

Ronnie Dunn released his first post Brooks & Dunn album in June of 2011, and announced exactly a year later that he’d exited his contract with his label Arista Nashville. We very well may be seeing Ronnie Dunn unfolding his creative wings after a long career, and I can’t wait to hear the result.