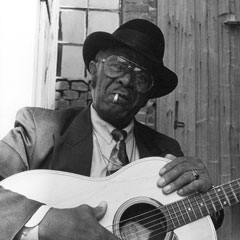 It was the summer of 2012, and I was stationed behind a double axle flatbed trailer dubbing as a festival stage in the capacity of a volunteer stage manager at the Muddy Roots Festival in Cookeville, TN. Dealing with the remnants of a tropical storm that had made its way into the middle Tennessee region, it had been a wet afternoon and early evening, but things were beginning to calm down and dry out for the night’s lineup of performers. Included on the bill were two old towering blues legends, L.C. Ulmer and Robert Belfour. L.C. Ulmer took his turn first.

Ulmer was tearing it up. I mean the crowd that had assembled was going crazy over this nearly 90-year-old blues legend playing with his guitar behind his back, and chicken scratching across the stage. Everyone was having a great time.

Then word made it to the back of the stage that Robert Belfour was not going to make it. He’d been in a terrible wreck on the wet roads, and his truck was crashed out in a ditch. The first concern was if Belfour was okay, but news on exactly what had happened was scant. Meanwhile my orders were to stall until a replacement band could be found to keep the music going.

Stalling was the easy part. L.C. Ulmer played a total of three encores to the appreciative crowd who kept calling for more while the next band could be procured. And just about the time the 3rd encore was wrapping up and poor L.C. was about spent from playing, I look to the left of the stage and down a hill to see a tow truck parked in the road, with the tow truck driver humping a guitar and amp up the incline. “This is Robert Belfour’s stuff. He’s here.”

I thought, “Are you kidding me?”

With his truck smashed up in a highway ditch, the 72-year-old Robert Belfour told the responding tow truck driver to screw his vehicle, and get him to this festival miles away. He had a gig to keep. Willing to accommodate, the tow truck driver told him to hop in the shotgun seat and hold on. Robert showed up on the festival site just in time to make his appointed slot, and as dapper as could be in a pressed suit and tie with a slick fedora, looking no worse for the wear. A mic was strung up in front of him, he sat down at his seat on stage, and began shredding like it nothing had happened.

The tow truck driver even stuck around through the set and rustled up some food for Belfour since the wreck meant he had to skip dinner. And after the set was done, the tow truck driver carried his guitar and amp back down the hill, loaded Mr. Belfour into the wrecker, and they were off to attend to the crashed truck.

As someone said to me back stage as I stood mesmerized by Belfour’s dedication to make the gig, “Now if that ain’t the blues”¦”

Robert Belfour was born September 11th, 1940 in Red Banks, Mississippi, and raised in a plank shack. He was taught guitar by his father who died when he was 13-years-old. Robert Belfour is considered a staple and giant of the Mississippi Hill Country blues traditions, right beside such Fat Possum Records stars as Junior Kimbrough, R.L. Burnside, and T. Model Ford. In 1959, Belfour moved to Memphis, TN and worked construction jobs for 35 years before starting his blues career in earnest in the 80’s, playing on Beale Street in Memphis. Belfour’s sound has a deep groove, and considered unique to himself from the use of alternative tunings and a percussive attack.