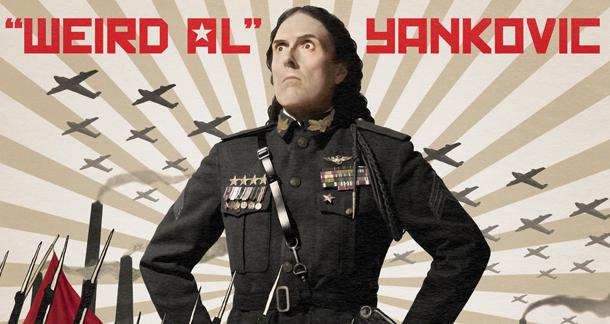 In an era when music has not only ceased to unite us, but has become one of the very implements used to divide us in the ever increasingly-entrenched culture war, there is one artist that is just weird enough to cross traditional borders of style, generation, and taste to tickle our funny bones universally. Yes, I’m talking about the curly-haired, spastic polka-playing parody artist “Weird” Al Yankovic.

Over the last 30 years, Weird Al has gone from being what young boys obsess over after their dinosaur phase, to becoming nothing short of an American treasure. As the lovable foil to whatever unfortunate song happens to be capturing the zeitgeist at the time, Weird Al’s genius is giving even the most hard-hearted among us the ability to laugh at ourselves.

Unlike the vast majority of artists that first made it big in the mid 80’s, Weird Al is as relevant as he ever was, if not more. Just appreciate this: As a parody artist and polka player, Weird Al has landed himself three Grammy Awards, 11 more nominations, six platinum records, and four gold ones. He is currently battling with Jason Mraz for the #1 album in the United States, and this is all from a man whose main instrument is the accordion. Weird Al was a nerd before being a nerd was cool, and very well may have been the germination point that allowed nerdy-ness to eventually take root as a symptom of the hip.

Highly respected amongst his musical peers for being able to shape shift into whatever style the parody calls for, and as a songwriter who can work within the limiting confines of someone else’s song structure, among the other accolades you can foist upon Weird Al, he’s also considered a musician’s musician. And the hints that his latest album just released called Mandatory Fun might be his last has necessitated a sense of reflection and increased value be placed on his music, and the joy it has brought to millions over the years.

One of the first singles from Mandatory Fun is the song “Word Crimes”. It is a parody of Robin Thicke’s “Blurred Lines”. Once again Weird Al illustrates his illustrious talent of toying with a relevant song’s meaning, while instilling it with an alternative theme that speaks to the heart of the current zeitgeist just as relevantly. With the onset of texting and Twitter, grammar has become a casualty of technology, and Weird Al takes the trend hilariously to task. And like always, he adds just enough subversiveness to give the song a sharpness, without being downright insulting (except to you mouth breathers, sorry). Many of us make these dumb grammar mistakes, whether from laziness, ignorance, or oversight. And once again Weird Al has us in stitches.

All I have to say is, before Weird Al retires he better make a country album, especially now that country is the most popular genre in America. That would make the 8-year-old me very, very happy.