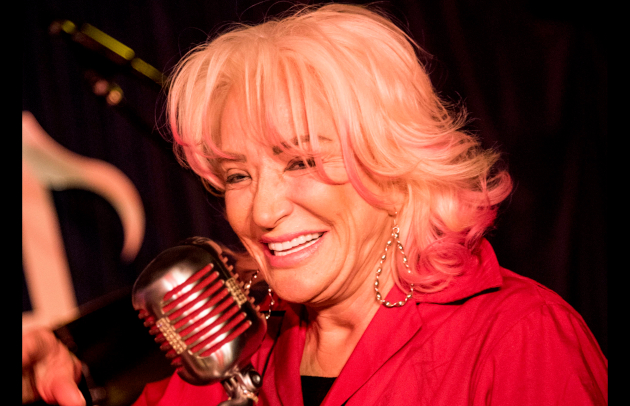 Dale Watson’s Ameripolitan gathering in Memphis, Tennessee officially commenced on Thursday night (2-20) at the pre-party held at Dale’s his newly-opened but historically-significant club, Hernando’s Hide-A-Way. Set to perform at the sold-out show was Dale Watson and His Lonestars, along with throwback legend Chuck Mead, and James Intveld from California. But the assembled crowd got a lot more than they paid for when country legend and recent Grammy winner Tanya Tucker walked in the door.

Fresh off of performing nearby at Graceland Live with Brandy Clark, piano playing wildman Jason D. Williams dragged Tanya to Hernando’s to see what all the hubub was about. Dale and Company were not expecting Tanya to make an appearance, but sprung into action, setting up a keyboard for Jason D. Williams, and making space on stage for Tanya. With Jason D. Williams, The Lonstars as a backing band, and Dale playing guitar, Tanya ran through Kris Kirstofferson’s “Help Me Make It Through The Night,” and then sang “I’ll Fly Away” as a duet with Dale.

Built around 1900, the four walls of Hernando’s can tell of Elvis himself, Jerry Lee Lewis, and other titans of Memphis and American music playing in the iconic club. Jerry Lee appeared at Hernando’s so often in the 80’s and 90’s, he referred to it as his office. Hernando’s Hide-A-Way officially closed in 2006 for everything but private events, but Dale Watson bought the building in 2018 for a song, and now it’s a swinging honky tonk once again.

Hernando’s is one of the primary venues for the Ameripolitan gathering this year, which culminates in the Ameripolitan Awards on Monday night. Numerous other event will be happening all weekend, highlighting many of the roots-influenced artists that regularly don’t receive attention from other awards. Stay tuned to Saving Country Music for occasional updates.

Thanks to Kevin Smith for the reporting and pictures.