The autopsy and toxicology report for artist manager Jon Hensley was released to the public on Friday (7-17) with an official cause of death determined to be “Asphyxia via Choking on Food Substance” and “Ethanol Andalprazolam Intoxication.” Jon Hensley died unexpectedly on June 1st in his home in Bowling Green, Kentucky. A 911 call was made just before 10 a.m., and when authorities arrived at his home, Hensley was unresponsive. The death was preliminarily labeled “accidental.” He was 31-years-old.

The autopsy was performed on June 2nd, 2015 at 9:25 a.m. by Dr. Randall Falls and Dr. Donna Stewart. Upon examination, the doctors concluded, “Death in this case is due to asphyxia via accidental choking on food substance. Intoxication by the combined effects of ethanol and alprazolam is a contributing factor to death.”

On the choking, the autopsy specifically states, “Lodged within the oropharynx and occluding the proximal airway is a solid, tan-white, partially-masticated food bolus that consists of what appears to be pork or chicken.”

Jon Hensley has a blood alcohol level of 0.300% at the time of death which is over three-times the legal limit (0.08%) in Kentucky. 49.9 ng/mL of Alprazolam, which is a generic Benzodiazepine, commonly known as Xanax, was also in his system. The “therapeutic” range of Alprazolam is 10.00 to 40.00 ng/mL. The therapeutic range is the average level of drugs in the system for someone who is prescribed the drug as a medication. Anything above the therapeutic range is considered dangerous or lethal. Saving Country Music has been unable to independently determine of Jon Hensley had a prescription for Alprazolam.

Natural diseases or lethal trauma were ruled out as a cause of death in the autopsy report, though two injuries were found during examination.

The 1st injury was the black eye referred to in the original police report released on June 3rd.

Other than these findings, everything else examined during autopsy and toxicology appeared normal.

Upon the receipt of the autopsy and toxicology report, the Bowling Green Police Department officially closed the criminal case pending in Jon Hensley’s death, according to reports.

Jon Hensley is given credit for helping to revitalize the career of Wanda Jackson when the Queen of Rockabilly began to perform and record again after a lull in her career. Wanda Jackson recorded an album with Jack White called The Party Ain’t Over in 2011, and worked with Justin Townes Earle on 2012’s Unfinished Business, putting her back into national prominence. “Jon’s very valuable to me and the resurgence of my career,” Wanda Jackson is quoted as saying. “We’re kindred spirits.”

Because of the common occurrence of rumor, conjecture, and accusations involved in this story, the verbatim scans of the relevant pages of the autopsy and toxicology can be found below. PLEASE NOTE: This is not an effort to exploit a sensitive situation or to delve too deep into a private manner, only to validate facts. The full autopsy and toxicology is a matter of public record, and all the information reported on here can be attained and verified independently. 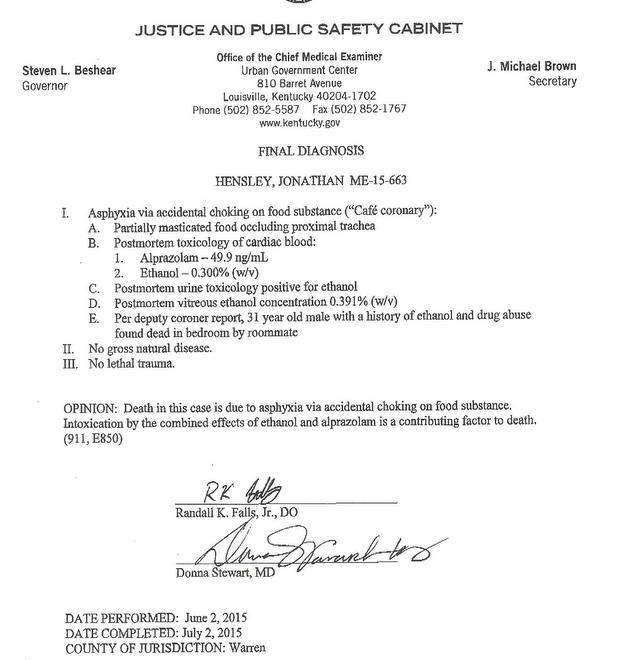 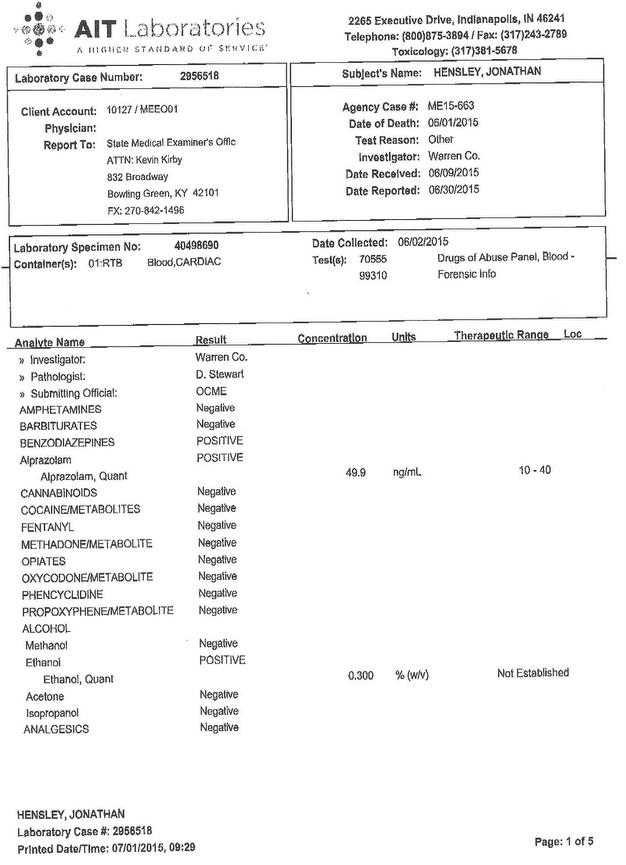 A reporter for examiner.com named Jessica Blankenship offered favorable reporting to individuals she personally refers to as “friends” when reporting Jon Hensley’s autopsy. Beyond not reporting on the secondary cause of death of “Ethanol Andalprazolam Intoxication” whatsoever, she also printed falsehoods about Saving Country Music’s previous reporting.

“While another website disclosed the police report with personal information, they also led readers to believe that the death was due to drugs,” the report says, but nowhere did Saving Country Music ever say, imply, allude, or hint that drugs or an overdose had to do with Jon Hensley’s death. Conversely, Saving Country Music strongly cautioned the public from coming to conclusions or spreading rumor before the autopsy and toxicology was released.

On June 3rd, Saving Country Music specifically said, “…rumors of Hensley passing away due to overdose or other causes have yet to be confirmed, and no official cause of death has been determined.” And on June 15th, Saving Country Music posted a specific report in an attempt to stave off rumors surrounding the case, once again stressing no cause of death had been determined, and cautioning people from speculating.

And of course, in the end, drugs were a determining factor in Jon Hensley’s death. However Jessica Blankenship did not report on them whatsoever.

Jessica Blankenship’s report also says, “Family members of Jon Hensley reached out and requested that the information was to be removed due to the sensitive nature of the matter.”

This is also incorrect. Saving Country Music has never been contacted by any member of Jon Hensley’s family requesting the police report, or any other coverage be taken down.

Finally, Jessica Blankenship states, “This [police] report was to not be released to the public as it was an open case at the time. Instead, the website continued to lead readers on an over dramatic scenario, as well as disclose personal information on the family.”

This is also incorrect. No personal information on Jon Hensley’s family was ever published, and Saving Country Music exhaustively validated that there was nothing incorrect, untimely, or improprietous in posting the police report, and has taped interviews with Bowling Green Detective Jared Merriss and Police spokesperson Ronnie Ward that can validate this.

Jessica Blankenship did not name Saving Country Music by name to clear herself of concerns for libel.

Meanwhile multiple high profile individuals, including Shooter Jennings, have been telling individuals to ONLY trust the reporting of Jessica Blankenship referring to her as “us,” and characterizing it as the “truth.”

Saving Country Music remains committed to serving the public with the correct information about the unfortunate death of Jon Hensley, and extends its sincerest condolences to Jon Hensley’s friends, family, and fans for this unfortunate passing. Donations can be made for Jon Hensley’s final expenses by CLICKING HERE.