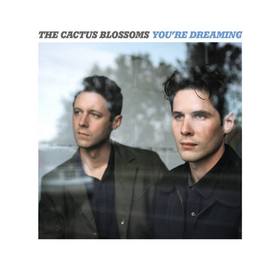 The Minneapolis, Minnesota-based Cactus Blossoms have signed to the St. Paul-based Red House Records and will release a new record January 22nd called You’re Dreaming. The second-coming of The Everly Brothers, the singing duo formed in 2010 from their mutual appreciation for classic country and early rock and roll, and now are considered by many as pace-setters when it comes to tight and soaring harmonies from a songwriting duo.

You’re Dreaming will be blood brothers Jack Torrey and Page Burkum’s third album, complimenting their self-titled debut release from 2011, and Live at the Turb Club from 2013. The new record will include ten original compositions, and will be produced by JD McPherson—an old-school throwback rock and roll-inspired artist himself. Though The Cactus Blossoms are known for their excellent covers of traditional tunes as well, their original compositions are just as enriching and slide right into a repertoire that enchants a wide range of roots listeners.

The Cactus Blossoms put pen to paper with Red House in August. “They are a wonderful group of people and we’re honored to be a part of their musical legacy and future,” the brothers said. “It’s time to get our new album out into the world!”

Red House Records was started by folk musician Greg Brown in 1981, and recently released Dale Watson’s new record Call Me Insane, and Charlie Parr’s Stumpjumper. The Cactus Blossoms will also be heading out on tour ahead of the release.