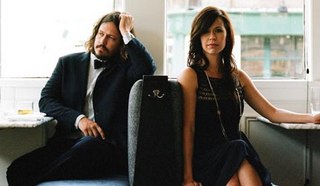 Though the writing has been on the wall for a while now, today one country music’s most critically-acclaimed modern singing duos officially called it quits. The Civil Wars, who embodied evolved songwriting much more indicative of Americana, spellbinding vocal presentation bordering on the classical or operatic, and whose talent won the four Grammy Awards and multiple nominations from major country awards shows despite their out-of-place, refined nature, released a statement today saying the duo is officially no more.

The Civil Wars made up of duo partners Joy Williams and John Paul White have regretfully decided to permanently part ways. The difficult decision ends a tumultuous period for the four-time Grammy Award-winning band, who has been on indefinite hiatus since late 2012. As a thank you gift and farewell, the band is offering a download of their rendition of “You Are My Sunshine.” Recorded in 2010, the track was originally released in 2011 as a b-side to the band’s limited edition Barton Hollow 7” vinyl. This is the first time the song has been available digitally in the U.S. Both Joy and John Paul have added their personal words on disbanding here below.

Joy Williams comments, “I am saddened and disappointed by the ending of this duo, to say the very least. JP is a tremendous musician, and I will always be grateful for the music we were able to create together. I sincerely hope that ‘You Are My Sunshine’ will be accepted as a token of my gratitude for every single person that has supported our duo throughout the years. I’m so thankful and my heart is full. Looking ahead, I’m excited to share the music that I am writing and recording in the midst of this difficult transition. I’ve loved being back in the studio, and have missed performing live. I look forward to seeing you soon.”

John Paul adds, “I would like to express sincere thanks to all who were a part of the arc of The Civil Wars from the beginning, to the end, and all points in between. My deep appreciation goes out to all who supported, disseminated, and enjoyed the music. Whatever shape or form the next chapter takes, thanks for being a large part of this one.”

After only one full-length album, 2011’s Barton Hollow, The Civil Wars who met at a songwriting session in 2008 in Nashville, found themselves amongst “internal discord and irreconcilable differences,” announcing this to the public after abruptly canceling a tour in November of 2012. It was clear that Joy Williams and John Paul White wanted different things from their music careers, and despite the stark intimacy of their music—many times sung with the duo looking into each other’s eye—they could not find enough common ground to move forward.

In 2013, amidst the openly-acknowledged separation, the duo finished and released a second album, aptly self-titled. Despite the turmoil surrounding the band and the lack of a tour, the album debuted at #1 on the Billboard Country Charts, and again became a favorite of critics, while still finding good commercial success.

Both John Paul White and Joy Williams have moved on to different things: Joy mostly as a singer, and John Paul as a guitar player, producer, and founder of Single Rock Records in Muscle Shoals in Alabama, releasing an album from St. Paul & The Broken Bones.

The duo is done for good. But their influence for intimate and ornate harmonies deftly refined, and their two finely-crafted albums, will live on.

break up, John Paul White, Joy Williams, split, St. Paul & The Broken Bones, The Civil Wars, You Are My Sunshine