To The Jamey Johnson Lovers & Haters 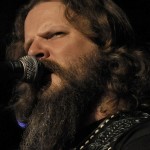 A review of Jamey Johnson’s new album The Guitar Song is coming, but since every time the words Jamey and Johnson are mentioned a brew ha ensues, I hope with this to get some of the drama and positioning statements out of the way so the review can purely be about my take on the album, and not the sideshow the mention of his name creates. After all, this might be one of the most important album releases in years.

Jamey is a polarizing figure. Sitting here before listening to a note of the album, my jury is still out, and I can see it both ways. Last week I was told by people on both sides, that if I did not deliver either a glowing review of the best country album in 30 years, or call it a hoax from a fake Outlaw, that the whole mandate of Saving Country Music would be revealed as a sham. The truth about Jamey Johnson and this album probably lies somewhere in the middle. Everyone needs to take a deep breath and understand that both sides are fighting for the same thing here: the integrity of country music.

For The Jamey Johnson Haters:

Listen, I know he wrote the song “Honky Tonk Badonka Donk.” We all had a fun time roasting him for it, and I was shouting him down as much as anybody. But that is in the past. 5 years in the past, and it is not relevant to his current music. It was a gimmick song that he wrote as a joke. It doesn’t make it right, but I can’t listen to his new album and say I hate all the songs and justify it by saying, “He wrote Bandonka Donk.” If I don’t like Jamey Johnson or his music, it is going to be because of what he is doing right here, right now. That way I know my arguments will have solid foundation, and not be a flimsy case based solely on an old grudge or personal taste.

And yes, we should be speculative of anything put out by Nashville, but writing off everything Nashville-based before we hear it is bigotry, the same bigotry that keeps great independent music off of radio, simply because it’s not industry based. It is important to draw distinctions in mainstream country to create solid arguments. I don’t know if Jamey Johnson is an Outlaw, but he sure as hell is much closer to one than Josh Thompson, Gretchen Wilson or Eric Church.

For The Jamey Johnson Lovers:

I’m tired of the whining about how Jamey Johnson doesn’t get mainstream radio support. The man’s songs have been played on the radio, and that is something that dozens of deserving bands will never have happen. Any radio support for any music that is not pop country is a marvel these days, and should be appreciated. Same goes with awards, which Jamey has won and been nominated for, and he’s also performed on award shows. Jamey is not suffering from lack of attention from the music industry, and to assert so is insulting to independent artists who’ve received nothing.

You also have to understand where some of the suspicion and anger for Jamey Johnson comes from, and that it is the same anger that you have when you can’t hear Jamey’s latest single on the radio, but you hear Taylor Swift’s twice. Right now Nashville is attempting to exploit is own anti-Nashville sentiment with manufactured “Outlaws” who sing songs about how pop country sucks while they use the same infrastructure as the pop artists do to get ahead.

So those are my positioning statements. I’m not trying to tell anyone to be or not be a Jamey Johnson fan. I give my opinions with the idea that they will educate you to help you form your own. Feel free to bash me, or bash Jamey lovers, Jamey haters, NYC Mosque supporters, Arizona Immigration haters, or whatever below, but I’m off to finish my review of the album.