WARNING: The Roots Resurgence Will Not Last Forever 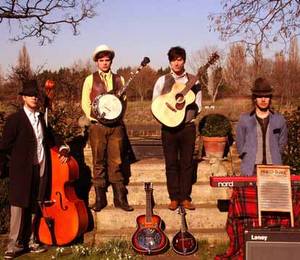 It borders on astounding how short-sighted human perception can sometimes be. In the midst of trend arches and bubbles, we convince ourselves we are experiencing the new paradigm and it will be this way forever, so much so that in the early-mid 2000’s America’s entire financial system retooled on the perception that real estate would appreciate eternally and there was no risk in interest-only loans and overvaluing property. A similar short-sighted outcome transpired with the dot-com bubble in 2000.

Analogously, in the present-day roots music realm we live in times of high cotton. With the widespread commercial success of bands like Mumford & Sons, The Lumineers, and the Avett Brothers, artists and bands that for many years were pushing against stones are finally getting the recognition they deserve as capital from labels and distributors loosens, more roots music outlets open up, and promoters, booking agents, and managers look to get in on the ground floor with artists who may turn out to be the next Mumford. Some of the artists that we thought might never get a chance of making it in the music business despite their overwhelming talent are now getting signed to solid labels and showing positive signs of being able to make a fair living.

But there’s no guarantee it will be this way forever. In fact if there is any guarantee, it is the opposite, and we may already be more of the way through the roots popularity trend and its corresponding capital influx than we have time left before it peeters out, and post grad roots bands and their beards, vests, and banjos become widespread fuel for comedic fodder similar to how we laugh at the folk revival or hair metal today.

Sure, the people with roots music in their hearts will still be around, but the capital infusion caused by the popularity of roots music will not be. That is why whenever I am talking to artists, bands, labels, promoters, festival organizers, etc., I implore them to understand that these good times will likely not last, and right now is the time to make hay for the purpose of sustainability, to take advantage of the renewed interest in roots music to build infrastructure and make gains, because this opportunity may not come around again or be this fortuitous.

9 months removed from the release of Mumford & Son’s blockbuster Babel, and the focus of the music populous seems to already be shifting to Daft Punk’s influence on the EDM world, and big releases from Kanye West and Jay Z. Yes, true fans of bluegrass, Americana, real country, deep blues and folk may be more than happy to say fare thee well to the popular music interlopers who invaded their little scenes recently, but their money and interest is what could finally give some of their favorite artists and entities the support they’ve needed to find long-term sustainability.

“I think we’re already on the other side of the folk movement,” Seth Avett of The Avett Brothers recently told the Twin Cities Pioneer. “It’s certainly having a moment, and that moment will pass. … Every five or six years, the public gets tired of whatever is big. … And what happens when something is commercially viable and acceptable, people step in that aren’t inspired but are looking to make money.”

Seth and the Avett Brothers are often given credit for inspiring bands like Mumford & Sons and The Lumineers. “Art is not a competition,” Seth continues, “And the Mumford guys are big fans and very vocal about our influence on them. It’d be more difficult if they were the ones standing up saying, ‘We’ve created this and it’s ours completely.’ And I can’t exactly talk about how bad it’s been for us.”

So how are the Avett Brothers planning to weather the inevitable down tick in interest in Americana? “We embrace what’s happening in our lives to keep (the music) current,” Seth says.

Not embracing the current is what has created some criticism of the Americana Music Association, which seems to be slow to take advantage of Americana and roots’ recent revival. Though the AMA has done some nation building recently by moving their offices from Nashville to Franklin and announcing a new Americana festival, their recent awards nominees seem to hint that the organization is still somewhat too steeped in the past, without a finger on the pulse of the historic gains roots music has made in the past few years.

But whether it is the AMA, a local or regional roots festival, or an artist looking to put out their next album, they would be wise to try and take advantage of the wide eye roots music is currently being blessed with, because we have all seen the times when that eye was uncompromisingly closed.