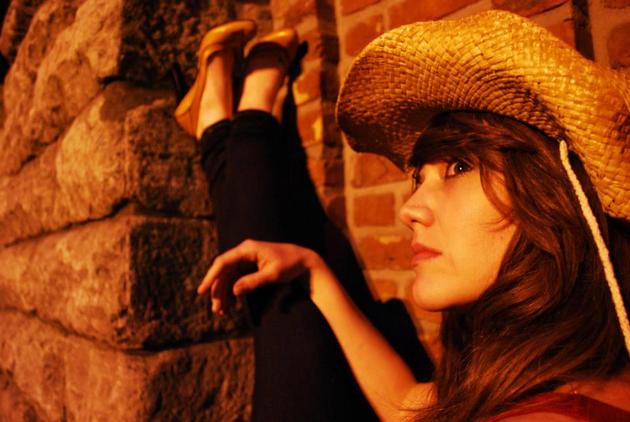 That’s right ladies and gentlemen, the Nelson clan can now field three generations of performers on the stage, and the new generation is about as defiant and ass kicking as you might expect. Rearing out of the gates comes the rambunctious and ribald Raelyn Nelson and the Raelyn Nelson Band: a full throttle country rock experience, just as much Loretta Lynn as it is The Ramones, with Willie’s little granddaughter out there in skimpy miniskirts and a flirty midriff while making one hell of a racket and breaking hearts.

As you can imagine, Raelyn was raised with country music poured right into her bottle, and along with her obvious influences, (including one that goes by the name of “Willie”), she’s a huge Loretta Lynn fan, and will put her dukes up to anyone who has anything cross to say about the country queen. But when it came to putting out her debut EP, the music took a different direction, with more of a rock and punk attitude as can be inferred heavily by the block letters, and even Raelyn’s exposed midriff that mimics almost exactly the cover of The Ramones’ 1976 debut cover. 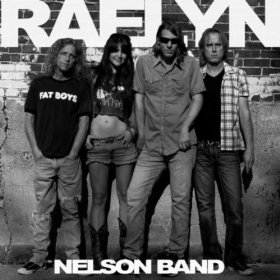 Raelyn has been playing in Nashville and performing for a while now mostly in the vein of her family tradition. But when she partnered up with underground rock producer Jonathan Bright to try something a little different, what they came up with is self-referred to as “Country/Garage Rock”. Wild-eyed with a lot of girl power and melodic sensibility, The Raelyn Nelson Band EP may not exactly wow the traditional country crowd, but it certainly gets your attention and has you singing along, even if it’s filed as a guilty pleasure.

The lead off track to the EP “Do You” and the later track “Careless” finds Raelyn waxing unapologetically self-destructive yet ultimately resilient in a similar vein to Lydia Loveless. “Moon Song” takes a lighter approach, with Raelyn appropriating the ukelele like her aunt Amy Nelson of Folk Uke, and dueting with her famous grandfather himself in a song that is simple and sappy, but still refers to the family’s natural inclination to songcraft. “He’s All Mine” is where Raelyn exposes her country roots and love for Loretta in a track that is twangy without interrupting the winning streak of infectious groove and melody this EP sports. The final song “Getta Room” about inappropriately mugging down in a booth may be a little bit too long, but exhumes the early 80’s punk rock approach of girls with the guts to tell it all.

With this EP, Raelyn isn’t looking to make your eyes water, but for what it is, it shows a lot of promise from the young Nelson as a singer, front person, and songwriter. And as she likes to point out, “I don’t really have any desire to be a ‘solo-artist’. Everyone in my family who plays music has always placed a lot of importance on band chemistry, on stage, off stage and in the studio. Our band can almost read each other’s minds. Why would I mess with that?”

Reading Raelyn’s mind along with Jonathan Bright are Paulie Simmons and Preach Rutherford from the band Defense Wins Championships.

Raelyn is the daughter of Willie’s son Billy Nelson from Willie’s very first marriage. In a somewhat strange circumstance, Raelyn is actually slightly older than her uncle, fellow country rock performer Lukas Nelson. But no matter, Lukas Nelson, Raelyn’s aunt Amy Nelson from Folk Uke, and everyone else from the Nelson clan has welcomed Raelyn into the performing family. “I’ve been told by more than one person in the ‘biz’ that I’m stubborn like my grandpa. I kind of like that.”

There’s a lot still to be determined about where Raelyn’s musical nose will point, and if she can make music a full-time, non-stop endeavor. This certainly should be approached as a rock album first with a little bit of country mixed in, but classifications aside, Raelyn Nelson shows a lot of spunk on this very enjoyable EP.