Yola Takes Strong Momentum From AmericanaFest On The Road 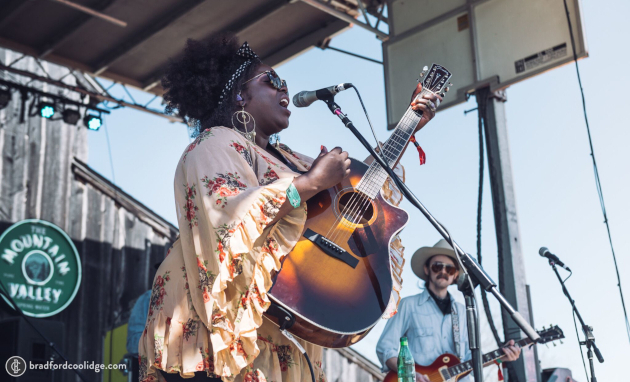 British-born country soul singer Yola didn’t win anything she was nominated for at the 2019 Americana Music Awards last week. Up for both Emerging Act of the Year and Album of the Year for her 2019 Dan Auerbach-produced record Walk Through The Fire, it wasn’t Yola’s year for hardware apparently. But a consensus emerged throughout the 2019 AmericanaFest event that this was the moment Yola had arrived.

Singing her song “Faraway Look” on the September 11th awards show at the Ryman Auditorium, it was arguably the most moving performance of the presentation. Then Yola made numerous other appearances throughout AmericanaFest week, drawing capacity crowds wherever she held court, and leaving lasting impressions.

You can preach about diversity in country and roots music all you want, and attempt to instill it through nominations, awards, and fawning features on entertainment websites. But if diversity doesn’t come with undeniable talent that emphasizes why it can be so important, it will never do the important work of breaking down the hardened perspectives that keep prejudices alive.

Yola isn’t one of the most promising and inspiring talents in all of country and roots in 2019 because of who she is. It’s because of the incredible talent she possesses, and how she showcases it. Who she is just happens to make her ascent that much more important.

This will be showcased when she takes the stage at Willie Nelson’s Farm Aid concert this Saturday, September 21st in Wisconsin. Yola is also booked at the Austin City Limits Festival in October, as well as numerous opening slots for Kacey Musgraves and Greta Van Fleet through the latter part of 2019. Yola has also been announced as one of the openers for Old Crow Medicine Show as part of their annual New Years Eve appearances at the Ryman Auditorium.

Beyond these opportunities, Yola is scheduled to make her own headlining appearances throughout the latter part of 2019 and into 2020 as part of her recently-announced “Walk Through The Fire World Tour” (see dates below). Similar to many fast-rising stars in the roots world, you get the sense you may not get an opportunity to see them in intimate venues for very long. This will be your chance to take in a world class talent that we will be talking about for years to come.