Aaron Lewis Berates Crowd For Not Being Quiet, Storms Off Stage 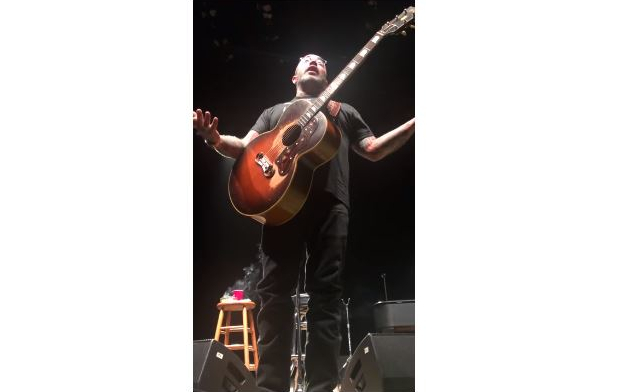 For the second time in as many months, Staind frontman turned Big Machine country music recording artist Aaron Lewis has hard cussed a crowd out for not being quiet enough during one of his acoustic concerts, and then stormed off stage, not finishing the full show. The most recent incident occurred Saturday night (3-9) at the Criterion in Oklahoma City near the end of his set, and was especially jarring.

“Shut the fuck up!” Aaron Lewis shouted at the crowd after he had unplugged his guitar, and stood at the edge of the stage to play his song “Thank You.” “Listen, I’m fucking good. I don’t have to do this.”

After waiting and strumming his guitar a bit to see if the crowd would calm down, Lewis then walked back to the microphone to say, “Listen, if you don’t shut the fuck up, you can’t even hear the guitar. I’ve got three more minutes. Three. Can you please for once, through the whole fucking evening. You guys have talked all fucking night. Shut the fuck up, or I’m done.”

Lewis then walked back out to the front of the stage, saying off the mic, “It’s so fucking ironic that this song is a thank you, and I can’t get you to shut the fuck up to hear it.” Shortly thereafter, he stormed off.

The incident is very similar to one that occurred at the Pharr Events Center Saturday, February 2nd when Lewis also walked off the stage, complaining the crowd was too loud. Some news outlets jumped on the story as one of racial insensitivity after one fan told Lewis he needed to tell people to be quiet “en Español.” Pharr is a Texas border town adjacent to McAllen that is 93% Hispanic. Lewis responded, “I’m sorry, I don’t know how to speak Spanish, I’m American.”

In both instances, the majority of noise from the crowd that can be heard on video is not heckling or booing, but other people in the crowd trying to quiet their fellow concert goers, ironically exacerbating the crowd noise. As annoying as concert talkers can be at any show, they’re especially caustic at a solo acoustic performance. Ultimately though, it’s often up to the performer to hush the crowd with their music.

Aaron Lewis has been performing at solo acoustic shows for many years in between tours with Staid and full band country shows. His next record, State I’m In, is scheduled to be released on Big Machine April 12th.