Album Review – Adam Lee’s “When The Spirits Move Me”

Let me level with you, when this album first found its way into the Saving Country Music compound, I looked at the front cover, the endless parade of drinking songs and thought, “I’ve seen this bit before. Can’t we evolve beyond boozer ballads and retro bits?” But good music abides friends, and When The Spirits Move Me by Adam Lee & The Dead Horse Sound Company, is good music.

Adam Lee likes to drink, and then write songs and sing about it with a voice somewhere near the slickness of Dale Watson, that can also limbo down looowww like Junior Brown, all while holding himself like a slightly plumper version of Pokey LaFarge. You may get pulled in the door with the voice, but you will stick around for the songwriting. Though the theme is one (drinking), the witty lines and turns and stories are many, and the quality stays top shelf throughout the album. And words are just words without music, and the music arrangements, instrument selection, and tone throughout this album fits each song amazingly well, and speaks to Adam’s insistence at pulling out all the stops to represent these songs as best as possible, and getting perfection in the performances that must be as slick as his hairdo on the front cover. 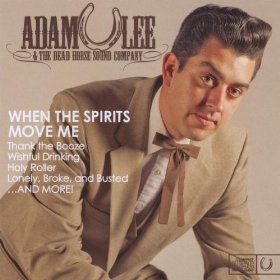 This album includes 12 originals. The opening track “Drinking, Cheating, Loving, and Leaving” is just so damn dialed into the classic country mode, it sucks you right into the album, while songs like “When The Spirits Move Me” and “Liquor’s a Prison” work the ol’ country idiom bit quite well, accompanied with instrumentation that speaks to a very well-versed and studied country music ear. A duet with Abigail Henderson called “Wishful Drinking” was another standout track.

The best song by far is “Misery to Ruin”, which catches you completely off guard with it’s more modern feel and universal relevancy and appeal. A knock on an album such as this would be that it’s some sort of a retro gimmick. It’s the difference between Dale Watson and Wayne Hancock, and Lucky Tubb and Junior Brown; one side being guys who try to take old styles of music and move them forward, and the other side guys that try more to re-create the old sound. “Misery to Ruin” transcends all of that. Adam Lee’s voice fits seamlessly with the mode and textures of the music, and it is surprisingly honest and soulful. This song is so good, it makes you wonder why Adam wouldn’t want to knock off the period piece show and kick it modern, but maybe that’s the genius in it. As soon as you think The Dead Horse Sound Company is some easily-definable thing, it hits you from another direction.

I will say that except for “Misery to Ruin”, the album is one that’s more to put on every few months and appreciate for a spin or two, instead of one that gets stuck in your player for long periods. And if you think that ribbon ties and pompadours and retro country is hokey, you probably want to steer clear. But I was really impressed with the songwriting and authentic style, and for you neo-traditionalist, classic country nuts like myself, it will be right down your alley.

Adam Lee is also heading out on a Midwest tour, including a date with Wayne “The Train” Hancock! Check dates.

Find a preview of the entire album below, but here’s two full length songs for your listening edification:

Purchase When The Spirits Move Me