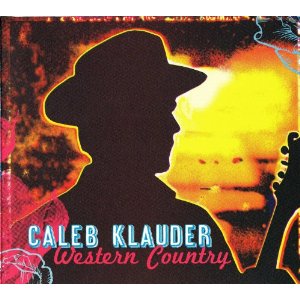 Caleb Klauder has been a well-kept secret of the Pacific Northwest for too damn long my friends. His latest album Western Country proves why. Some may dub him the Wayne Hancock of the West, revitalizing the classic sound without mimicking or mocking it, but his star is bright enough to burn outside the confines of any region.

I first saw Caleb in a small, dark, smoky barroom in southern Oregon in ’03. It was one of those experiences where you go to meet some friends, and end up being floored by a spectacular no-name musician blowing through town, with only maybe a dozen or less people there to corroborate your fish story, and no MySpace or other such things to follow up with.

The next time I saw him wasn’t until Pickathon outside of Portland, OR in ’09, though I had no idea it was him I was watching. He wasn’t there under his own name, but with The Foghorn Stringband, an outfit he plays with often, and sitting in with Justin Townes Earle. At that point the legend of Caleb Kaluder from that one night in ’03 was fortified in my brain, and even though I watched Caleb intently and named Justin Townes Earle as the best artist at Pickathon that year, without hearing Caleb’s signature smoky voice I had no idea it was him until maybe a year later when putting two and two together in a conversation.

This ascended the legend of Caleb Klauder in my mind even further, and so does this album. Man is it good. It just has a really good, fun, uplifting energy and feel to it. Solid, classic country stuff, some driven by mandolin, some not, but all pure, real, true country. It’s music to get you feeling right. It’s got such a classic texture you’d swear it was recorded in the fifties or sixties, and not from playing through blown out amps or screaming into megaphones, simply from style and a keen sense of taste.

The vintage feel is also the fault of Caleb’s voice. It is old way beyond his years, in a good way. It feels like it is from the company of all the old greats, like you are listening to a forgotten artist that shared the stage with Hank Williams and Lefty Frizzell back in the day, yet you can still experience it live today in its prime. All these accolades about Caleb’s voice, and to many he would be considered a mandolin player first, and should be.

He should also be considered a top-caliber songwriter. If you listened to this album with no liner notes or no previous knowledge of the songs, you’d either swear they’re all classic covers, or they’re all originals, when in truth it’s a healthy mix. Everything comes across so cohesive. I would’ve sworn to you that songs like “My Time Is Gonna Come” and “Worn Out Shoes” were written back in the day. They’re just too damn good to be written today. And then you take them and combine them with classic, but not common covers like The Louvin Brothers’ “My Baby Came Back” and Johnny Cash’s “Satisfied Mind” and you have an album that is a past-tense tribute and a present-day testament all wrapped into one.

This album doesn’t change the face of music or set some new trend or something, it is just a joy to listen to. Caleb Klauder should be considered a true stalwart of contemporary classic country, second to few, if any, and elevated by his propensity and humility to lend his talents to other bands and other names, and not hindered by it.

Two originals from the album: