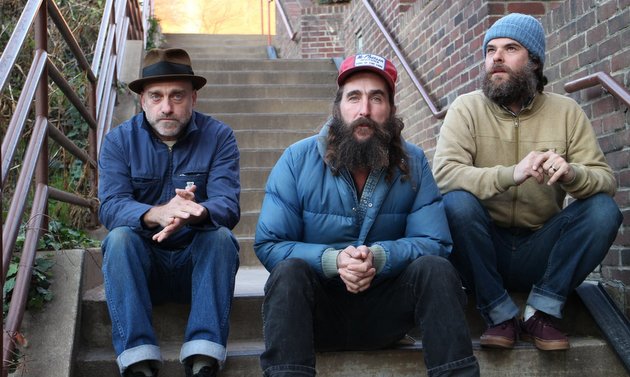 Before string bands were a “thing” in popular culture, there was the Hackensaw Boys. Before The Avett Brothers were selling out arenas, before Mumford & Sons were becoming the biggest band in music in a given year, before everybody and their brother was growing a beard and wearing suspenders and playing in jug bands, the Hackensaw Boys were mixing bluegrass and old time music with a punk attitude, and reshaping what a modern old school string band could sound like.

Born out of the same central Virginia haunts and sidewalk busking spirit of Old Crow Medicine Show, the Hackensaw Boys hit the streets in 1999 and have since been a big inspiration to others, and a proving ground for players and offshoot projects. You may not hear their songs peppered with “ho hey!” or gratuitous hand claps as they land on the soundtrack of some hit movie or in a commercial for Aqua-Fresh, but whether the bands that came later know it or not, the Hackensaw Boys had a hand in their success by helping to break ground for string bands with punk as a major influence.

The Hackensaw Boys don’t use inflected voices or the hokum that make a band like Old Crow Medicine Show such a hoot to see live. They don’t have the raw speed that the .357 String Band and Split Lip Rayfield display. They don’t have that strict adherence to the roots of the artform of The Foghorn Stringband, or the precision of so many modern bluegrass bands that are too numerous to count. They’re not the most pristine singers or apex instrumentalists. But what The Hackensaw Boys have that these others don’t is a ton of heart, and true authenticity. This is not building a string band as a skills competition or a nostalgia act; this is string band music in the raw, just like the back porch outfits from where the music was derived.

It has been ten years since the Hackensaw Boys released a proper original studio album, which is a little hard to fathom until you take into account the turnover the band has experienced in the lineup. Similar to The Time Jumpers, the Hackensaw Boys are more of a collective than a band, but the constant has been guitar player and songwriter David Sickmen who’s been there from the start. Fiddle player Fred Moyse, who’s also been around for the lion’s share of that time, contributes five tracks as a songwriter to this new album as well. They’re joined for now by Jimmy Stelling on banjo, Thomas Oliver on bass, and Brian Gorby on percussion and the charismo. Yes, the charismo. 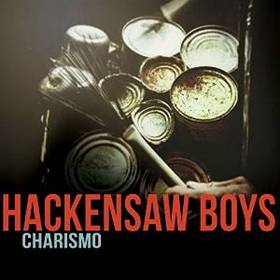 “Charismo” is not just a more masculine variation of “charisma,” or the name of the Hackensaw Boys’ new album. It is a percussion instrument derived from found objects strapped to the chest similar to a washboard. String and jug bands have been accessorizing their washboard setups for years with extra bells and whistles, but the Charismo is an animal all unto itself, with cans and other primitive noise makers extending out from it like a wearable drum set. It’s also primarily played with wire brushes instead of spoons or sticks. The charismo was first developed and named by former Hackensaw member Justin “Salvage” Neuhardt. More important than the Charismo itself, the idea of taking virtually anything and making a percussion instrument out of it has inspired countless other string bands to do the same.

The presence of the charismo on stage announces to the audience that this isn’t just some contemporary bluegrass outfit, but the instrument’s primary function is not show. The charismo fulfills the same spot the snare drum did in Jimmy Martin’s bluegrass band, which is to free up the rhythm players to focus more on the melody and instrumentation instead of keeping the rhythm on the strings. The bane of modern bluegrass is the “hack” on the mandolin that is necessitated by the lack of a percussion player. By including that bit of extra character to the music, the Hackensaw Boys can do something other string bands can’t.

But “charismo” could have a double meaning for this new album—meaning a mix of charisma and machismo. The songs are primarily about broken men and their stories, having to learn to live with less, trying to love someone with their warts and all, and hard to handle women. Charismo is this cantankerous take on life from the perspective of tomcat’s past their prime, refusing to change their ways, yet recognizing that time has moved on. As the final songs says:

Paying your dues, you’re piling up debts
All your fond memories, the first you forget
And you ain’t having fun boy, but fun is all around
The world it has turned, turned upside down

There’s a song called “Flora” about desiring a woman that doesn’t know you exist, and the interesting perspective of “Happy For Us in the Down” about having to weather both mood swings in a relationship. The songwriting on Charismo is deeper than it first appears on the surface, and reminds you a lot of The Band or Bob Dylan, where at times it’s delightfully sloppy and humble in how it really has to work to articulate the message it wants to get across, just like all of us struggle to wrangle our emotions, and the wisdom they’re attempting to impart to us at a given moment. The Dylan, Levon Helm, blue collar attitude is also endowed on this album from the presence of the legendary Larry Campbell manning the producer helm.

The Hackensaw Boys are not one of those bands that wow you with any one thing in particular. But they remind you of yourself, and they speak directly to your heart in how their struggles parallel your own. They’re a true working man’s band without any show or fluff to dilute the heartache and struggles they convey that give you a sense of camaraderie with the band that most other outfits just can’t hack.

Purchase Charismo from The Hackensaw Boys