There is a revolution going on in country music right now. And unlike with Sturgill Simpson, Chris Stapleton, and Jason Isbell, the Cody Jinks revolution is happening removed from the media consciousness, and completely without its aid.

The numbers Cody Jinks has been putting up are just as incredible as many of his independent cohorts, perhaps even more so considering he’s been doing it all through his own effort, growing one of the most fervent fan bases in music, while not receiving nary a mention for late night television opportunities, or major industry awards, or anything else that would give him a boost outside his own purview.

In 2018, Cody Jinks will release a new album, and it will likely be his biggest one yet, and may send the same reverberations throughout country music as the breakout records from country music’s other independent stars. But to understand how we got here and where this whole Cody Jinks thing might be headed, you first have to understand where it came from. And to do that, it’s imperative you don’t just focus on his most recent efforts like 2015’s Adobe Sessions and 2016’s I’m Not The Devil. The record that most explains why Cody Jinks has been able to build up such a big following, and such a deep connection with those fans is arguably his 2010 effort Less Wise.

Less Wise was recently re-released in a remixed and remastered form called Less Wise Modified, which includes a couple of alternative takes of original songs and a cover of Hank Jr.’s “Whiskey Bent and Hell Bound.” The original recording was sort of a no budget affair according to Cody, leaving a bit to be desired when it came to the final production quality. It’s also probably fair to state that Less Wise doesn’t have the same spice musically that subsequent releases would. The upgrades and bonus tracks in the new version are nice additions to an album that’s already legendary in the minds of Cody Jinks fans. But if you’re jumping in mid stream to the whole Cody Jinks thing, these additions are not where your focus should be. 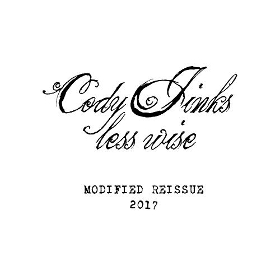 It is mostly the result of two very important songs that would make Less Wise the record that would resonate so deeply with fans, Cody Jinks could circumvent all need for “scene,” he wouldn’t have to compromise by soliciting for industry help, or kowtow to the press to find the traction he needed. And these two songs have since become standards of Cody’s live shows, and some of the most streamed songs from his catalog right beside the bigger tracks from his more recent and better-promoted projects.

Both “Hippies & Cowboys” and “Somewhere in the Middle” are strikingly autobiographical to Cody Jinks himself. Really, the songwriting is nothing more than a recitation of Cody’s life. But it’s the honesty, and the average Joe mentality that makes them exceptional and sonorous with Cody’s crowd.

I’ve never been a part of any musical scene
I ain’t just talking Nashville, if you know what I mean

Some people criticized Saving Country Music and other outlets for ignoring Cody Jinks early on, but the truth is Jinks was ignoring us. It was only when the buzz began to reach critical mass that Cody Jinks began to bubble up to the press and industry, and he still remains criminally under the radar. He’s like a Texas version of Chris LeDoux, doing it completely on his own.

Because just like Jinks himself, his fans aren’t conformists, but they’re not freaks either.

The whole Cody Jinks archetype is laid out in this one song, and under the title of “Hippies & Cowboys” which was the quintessential construct of the original Texas music movement.

“Somewhere in the Middle” doubles down on this working class mindset that so many of Cody’s fans can identify with, but don’t feel like is simply pandering to them. Where so much of today’s “country” music either looks to offer an unrealistic escapism from average life, or ingratiate rural dwellers with such flattery that it borders on the ridiculous, Cody Jinks offers the perspective that there is nothing wrong with just being normal, or “in the middle,” enjoying life, and being a good person of simple pleasures. You shouldn’t expect less, but don’t get chasing your tail envying more, because there’s nothing wrong with what you have, or who you are.

The other songs from Less Wise are similarly personal, like “65 Days in L.A.” about Cody’s not-so successful trip out West, and the pining sentiments of “Wake Up Becky.” Cody Jinks may never deliver a better heartbreaking chorus than the one found in “Loveletters and Cigarettes” (written by Nate Kipp). The title track of the album is about a cast of Cody’s older friends, and how they separate and change over time. “A little bit older, a little less wise,” the song laments. But on Less Wise, Cody shows a greater wisdom than most who write songs by understanding how to identify with an audience.

Fans aren’t flocking to Cody Jinks because they feel he’s some superstar marvel, and they can bask in glow of his incredible talent. It’s because they find a piece of their story in his. As a music artist grows, so do invariably the moans of some of those original fans who feel like it’s all getting too big, too fast, and losing the charm that first attracted them. But Cody Jinks has been able to get this far by growing sustainably. He doesn’t just gain fans, he doesn’t lose them.

And as Cody Jinks ascends from obscurity—not from the help of a famous name, a war chest of riches, or even the conventional music industry—he takes those fans with him, validating that they’re not just “in the middle,” they’re exceptional because they’ve been able to hold on to themselves, just like Cody has, despite both adversity, and success.