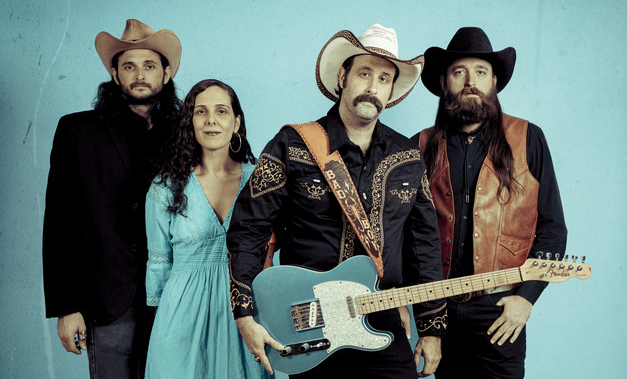 Now this is the kind of weird shit country music needs way more of. Somewhere, Kinky Friedman and the principal members of Commander Cody and His Lost Planet Airmen are all smiles, because the true legacy they started of hippies and cowboys sipping mushroom tea in their manly footwear in the courtyard of the Armadillo World Headquarters is alive and well in one of Austin, TX’s very last surviving honky tonk bands, the wild and rambunctious, and wickedly fun Croy and the Boys.

Forget all these so called “psych rock” bands clogging many of Austin’s remaining clubs that are doing nothing more more than aping the Arctic Monkeys, or Music Row’s spit and polished stand-in for an authentic Austin band that calls themselves Midland. Croy and the Boys are the true sound of Austin, TX paid forward over the decades, with the permanent stench of the honky tonks soiling their pearl snap shirts, and the 10,000 hours spent twirling the shit kickers of central Texas around dance floors logged and certified, thank you very much.

Croy and the Boys are survivors. They’re led by the mustachioed Cory Baum who was introduced to many in the Austin scene when he played bass for Leo Rondeau. Leo used to be synonymous with Austin, TX too, and now splits time with Nashville. It’s a similar story for Brennen Leigh. Dale Watson was so much a part of Austin it was a city ordinance that he perform the TV jingle for any new automobile dealership opening in the city, and now he makes his home mostly in Memphis. It’s been like a biblical exodus of Austin’s remaining badass musicians from an already depleted herd over the last couple of years, and Croy and the Boys are one of the very last little Indians left. It may be their mugs on the front page of the Austin American-Statesman as the ones turning out the lights on the Austin scene as the wrecking ball bears down and the bulldozers scrape up whatever is left to make room for a Mod Pizza franchise.

In their new record Howdy High-Rise, Croy and the Boys rear back on the big ol’ 16D Penny nail that is the rapidly deteriorating environment for Austin’s musicians and working poor, and sink that sucker flush with the wood surface in one mighty swat. To say this record is absolutely dead on still doesn’t do it’s level of dead on-ness justice. Here you go all you gentrifiers and Big Tech transplants, put this in your vape pen and smoke it. 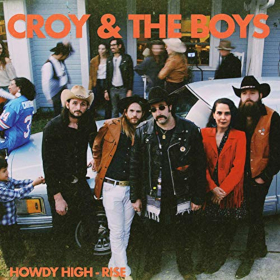 Someone should enter into public record a proposal to Austin’s City Council that every town resident of the present and future be required to sit in audience with Howdy High-Rise before articles of citizenry are assigned. Play this sucker over the loudspeakers in City Hall as a scathing indictment of the aggressive inaction that has gripped the city on the issues of traffic, parking, affordable housing, and the crisis in the music scene. Oh plenty of concern is shown and symbolic Band-Aids stuck on the problem, but the city’s a healthy seven years behind the curve that’s elongating more every day, and their puny proposals for a couple of flights of affordable housing units and “cohabited creative spaces” for the final musicians left are laughable in the face of the now inevitable destruction of Austin as the “Live Music Capital.” While quasi governmental organizations tasked to help with the problem argue about what fonts to use for their website and what new studies they should appropriate funds to, the problem has already killed off 90% of what they’re trying to save.

Think all the clatter Saving Country Music has raised for years about the catastrophic nature of the Austin music problem is nothing more than hyperbolic pap? Well pipe up Howdy High-Rise and hear it directly from the horse’s mouth. But if this was simply a record bitching and moaning about what has befallen Austin’s musicians and working poor, it wouldn’t be nearly as cool. Instead, Cory Baum pens the 12 songs of this record with a big ol’ shit eating grin parked under his gaucho mustache, and makes sure he’s getting the last laugh in. Being shit poor and a razor’s edge from destitute never sounded so much damn fun.

This is the kind of record a band featured in the Muppets would make if they were from Austin—rambunctious, attitudinal, and in moments, hilarious. And it’s country too, written and recorded for the two steppers and slow dancers Croy and the Boys are regularly employed to entertain, yet with that Austin, TX flavor by bringing in a little bit of accordion, and even flute to spice things up. Never taking themselves too seriously is the key ingredient to making Croy and the Boys such a hoot.

But that doesn’t mean serious subjects aren’t broached here, and in a manner the really digs down to the root of major problems, like in “It Seems Like You Just Can’t Be Poor Anymore.” Screw buying a house or envying the rich, you can’t even make rent in a shithole working two jobs in Austin. The song “Gentrification” is cuttingly true. So many of the people in a town like Austin are progressives in the streets, but viper capitalists in the sheets, displacing the working poor with their ultra-modern prefabrications, and busting up long-standing neighborhood communities that are often Hispanic and African American and that were forcefully relocated in the first place, and are now being made a diaspora due to affluent young whites moving in. Don’t think it’s an accident that conjuto king Juanito Castillo and his son appear on this record.

But this isn’t all just about Austin. Country music has always been the voice for the poor and the working man, and this is what Croy and the Boys revitalize in Howdy High-Rise. Sometimes the songwriting is sloppy and the tunes a little loose. Cory Baum loves to let a verse run as long as it needs to get his point or punchline across. But you can’t help root for the big ugly middle finger this record shoots to the high-rise class that moved to Austin to enjoy the nightlight they summarily destroyed with their housing density and noise ordinances. Austin music may never be what it once was, but Croy and the Boys get in the last laugh, and release a project that should both entertain, and be taken very seriously as a rebuke of the city’s shortsightedness.

Hopefully Howdy High-Rise is not an epitaph for the cool version of Austin, TX. But if it turns out to be, it’s a very fitting one.