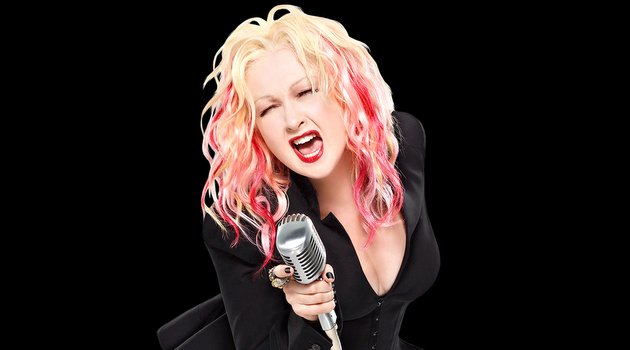 Never could I have dreamed when I first decided to channel my passion for music into operating a country music website that I would be asked to comment on a country record released from Queens-born New Wave 80’s sensation Cyndi Lauper. Even with the incredible onslaught of country music carpetbaggers looking to cash out or create a soft landing for their dying careers who have come before, Lauper’s massively thick New York accent and decidedly non-country style seemed like uncompromising deal killers for such a career move, even in this current country music climate where anyone and everyone is looking to take a ride on the country music gravy train.

But this is not your average “gone country” project. This is not Lauper looking for attention after a lackluster run. Think of her new record Detour like a vanity project. Instead of cutting a bunch of hackneyed country songs written by Lauper with help lent from professional Music Row songwriters like we’ve seen with Steven Tyler and others, or Lauper stretching her own country songwriting wings under some false hope of finding a new home for her declining career in the genre, Lauper has instead assembled a selection of classic country songs and a couple of pop standards and put them into a project to share her passion for the older style of country music that she professes filled her home when she was a kid, despite being well ensconced in one of New York City’s most dug-in buroughs.

Cyndi Lauper covers Patsy Cline on this record. Twice. She collaborates with Willie Nelson, Vince Gill, Alison Krauss, and Emmylou Harris. She shows her appreciation for Ray Price, steel guitar, twin fiddle, and yodeling. This is in no way an effort to get the attention of the mainstream country radio masses. Becuase if it was, the joke would be on Lauper. This is her way to sincerely share her passion for classic country with her fans, and whomever else is up for listening. 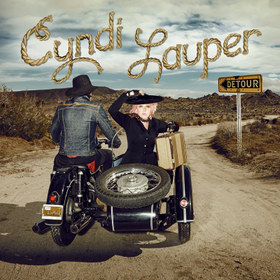 Like when you see non-country celebrities show up to country music awards shows all decked out in authentic country duds and they end up being the most country-looking personalities there, Cyndi Lauper shows that she has a penchant for country music that is probably stronger than most of the current mainstream performers who profess to be playing it full time. There are a few songs on the 12-song Detour like “Funnel of Love” and “End of the World” that are better categorized as classic pop. But many of the country songs are styled authentically, and lo and behold, Lauper’s singing style, which already employs little hiccups that are not too far off from the yodels of country, slides quite nicely into authentically interpreted tunes.

The problem with this project is not Cyndi Lauper’s intentions, or the songs she selected, or how they are produced. It just still has a very Christmas album feel to it in the sense that you’re hearing the same songs you’ve already heard dozens and dozens of times, and sometimes by dozens of other performers, and it all begs the question if any of this is of any value or contribution to music at large. Basically, Cyndi Lauper’s Detour relies on the listener becoming enamored with a new famous voice singing well-worn songs. Because otherwise, it offers very little that is fresh, or original.

That doesn’t mean there aren’t some admirable moments. It takes guts to cover Patsy Cline, and I’ll be damned if Lauper doesn’t do the songs justice. Jewel’s yodeling capabilities have never been adequately showcased by the country world, and despite the campy feel of the track, “I Want To Be A Cowboy’s Sweetheart” is pretty fun. This is a very campy record, as could only be expected from Lauper. But this resurgence in campy country, spearheaded by Kacey Musgraves and her neon cactus, has also helped usher in a more classic feel to country, so listeners shouldn’t be too quick to criticize.

There are also a couple of pretty rough moments on Detour, like when Lauper’s extremely thick and whiney Queen’s housewife accent emerges in the talking portions of “You’re The Reason Our Kids Are Ugly,” making the duet with Vince Gill almost unbearable. And Willie Nelson’s contribution to “Night Life” is so lifeless and breathy, it makes you fear for the well being of Willie beyond anything else. Willie sounds as gaspy as death itself, and completely uninspired.

But you know, whatever. This album is harmless. It’s Cyndi Lauper wanting to get campy and scratch her country music bone. And now she’s done it. And now we have a version of Cyndi Lauper singing “Heartaches By The Number.” You know, just in case we need it in an emergency. There are much bigger fish to fry than Cyndi Lauper showing her love to some old country songs, and there are probably much better ways to spend your listening time. But if you happen to be a Lauper fan, and a country fan, you’ll really get a kick out of this record, and shouldn’t feel bad about it, even if I find it hard to envision ever listening to it again now that this review is written.