I shamefully admit that even though I saw Hillstomp numerous times while living in the mountains of the Pacific Northwest, and was invariably blown away by their berserker approach to music, it never occurred to me to stop at the merch table and purchase Hillstomp the home game. How could a band putting out that much energy live, re-create it in a recorded format? That was the challenge the duo was charged with heading into the album making process. They also had to offer something different from the live set; a reason you’d want to listen without the in-person energy; a new dimension. With Darker The Night, they do both.

As I like to say about these guys, they are a two-person one man band. One man bands have to put out as much energy as multiple people, but Hillstomp doubles that equation. With a crude drumset made of buckets and accompanied by screaming slide guitar or banjo, this is not music that you sit back and marvel at the eloquence as your foot taps. It is like a chest-thumping ritual that makes you succumb to the carnal cry of the country.Imagine the music you would hear coming out of a ramshackle shack far out deep in the woods in the dead of night, with a dusty light and the raw energy of people and music bleeding out between the cracks of the old boards that are perceptibly pulsing to the sweaty beat. This is Hillstomp.

I’m sure some Hillstomp devotees have/will whine that this album doesn’t have enough headbangers, but it is buoyed by two excellent ones, “Cardiac Arrest in D” and “Satan Is Real.” These represent the pinnacle of their live energy, and they live up to their live counterparts. This album does an excellent job with tones. This is groove music. It doesn’t make you think, it makes you feel. And there is a tone and mood for each song that must fit for you to feel it right. The usually-present foot tambourine sounds like it’s being played three shacks over, giving the music an old and open feel. In the grungy songs, old mics covered with duct tape emphasize the growl of indiscriminate lyrics that work more like another rhythm instrument instead of the thread of a story. But when the lyrics do matter, they are not afraid to sing it strait. 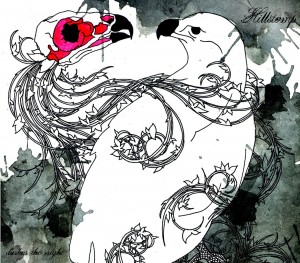 Hillstomp did not allow their live set to typecast them with this album, and this was a good thing, but it does lull a bit in the middle. Songs like “Crawdad Hole” I’m sure some will find boring, but people can’t be tempted to toss out all the slower tempo songs. After a few listens “Up Here” revealed itself as one of the album’s gems, with lyrics that do matter, and a positive message veiled in a dark song with infectious blues riffs.

To hardcore banjo fans, the banjo songs may seem a little simplistic. There’s not any wowing fingerwork, though it is solid, and in contrast the simplicity is endearing and more realistic to their overall sound. Overall, some may consider them more of a blues band than anything, but songs like “Old Plank Road” and “Blue Tick” are as true to the Appalachian/mountain/hillbilly music as any others you will find. This is the “Hill” to Hillstomp. Their music goes back to the time when people didn’t worry about what to call it, they just played it, and influences from the old country, and blues, and backroads melded into a genuine sound.

If you’re looking for classic country crooning and smooth steel guitar, this album will probably not be your speed. But if you like that hillbilly, back porch picking mixed with some post-punk slide guitar bluesy madness, this album is for you.

Listen to samples and/or purchase Darker the Night.