For years, the Honky Tonk Hustlas have been a hub right in the middle of the deep South, keeping the heart of real/underground country alive in an area infected with the sickness of country pop as much as any other. Their first album Hallways of the Always (2008) was a solid offering, and though they have never been a big touring band, they have shared many bills with big names rolling through their stomping ground of Montgomery, AL.

The band is fronted by T. Junior, who also writes a majority of the songs. The strength of the band is his naturally-unique, slightly higher-pitched voice with an endearing, nasally quality that can’t be faked. The lineup of the band is straightforward, with an acoustic guitar, upright bass, and mandolin/lead guitar. South of Nashville is also fleshed out by the legendary Andy Gibson, who beyond being Hank III’s steel guitar player, is our generation’s Tompall Glaser, recording over a dozen bands at this point in his home operation, opening up professional-quality recordings to artists that rarely can afford them, and doing it in a comfortable setting that nurtures creative freedom. 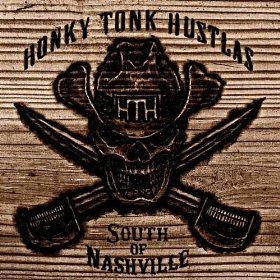 The instrumentation, arrangements, and performances on the album are very solid, and South of Nashville is slick, in regards that it does not sound like a home recording or a hurried project. Time was taken to do it right, and the same can be said for the cover art and presentation. Sonically, this is a fun album, constructed in the “hellbilly”, full-tilt, hard country mold.

I’ve heard some people say that this album “sounds” like Hank III. I disagree to some extent. T. Junior’s voice is nowhere near similar to Shelton’s, and the instrumentation is way more acoustic oriented compared to what Hank III is doing these days. Where the similarities between the Honky Tonk Hustlas and Hank III lie are in the lyrics.

The problem with South of Nashville is when you really sit down and listen to the lyrics and try to have them speak to you, there is nothing there. Nothing. At all. Or it is so buried under under cliche, it is barely worth searching for. The parody of Hank III and of the Honky Tonk Hustlas themselves in the lyrics can only be described as “relentless” and “awesome”. The parody almost seems purposeful, because it is so undeniable and blaring. The “whiskey, devil, I don’t give a fuck” parade goes on mercilessly for 15 tracks until you don’t want to hear another death reference for the rest of your life.

If I lined up all the comments from people on Saving Country Music saying they were tired of all the “whiskey, devil, cocaine” lyrics in the songs and albums I tout, I could reach the moon and back. In 2006 when Hank III released Straight to Hell, it felt fresh and relevant, but that style was played out over a year ago. And even in Straight to Hell and Hank III’s subsequent albums, there’s way more diversity than can be found here. His last album Rebel Within had songs like “Lookin’ For a Mountain” and “Karmageddon” and “#5” that offered a breather from the “drinking and druggin'” anthems.

In the Rebel Within album review written almost a year ago I said:

Some will complain that the drinking songs are too much. I agree that Hank should open up some new song themes in the future, though he starts down this path in this album. But Hank III reinvigorated the ‘hellraising” attitude in country. One of the reasons it seems overused is because Hank inspired an army of copycats who can’t craft an original idea, throwing out “whiskey,devil, cocaine” references with no direction or purpose.

This is what the Honky Tonk Hustlas do in South of Nashville, and it not only drags them down, it drags Hank III down, and all other bands who have these hard-edged songs but include some originality or diversity in their projects as well. Hell, it is dragging me down, because I have to answer to critics who say this “whiskey, devil” stuff is all I cover. The lyrics on the album are so stultifyingly bad, it oozes out to infect other projects, and the independent country scene in general, perpetuating negative stereotypes. Think of it like the spandex glam rocker in 2002 or something–way past its relevancy, but not long enough yet to be retro or even ironic. It’s just bad.

Maybe the best example is the title track “South of Nashville.” Good title and idea behind it, good music, fun song, but the lyrics are so cliche you can anticipate what is coming next, and at times, they don’t even make sense:

Well I was born way down in Dixie, round about a half past 9

Ever since then I’ve been raising hell, and man I’m feelin’ fine.

Then he launches into talking about how he needs to “get out on that road, no ain’t no lookin’ back”. Yet in the same phrase he says, “So I just keep on staying here, just South of Nashville”. OK, so which one is it? Are you on the road, or staying put? There’s a lot of references to being on the road in this album, which is a common theme in country music, but the Honky Tonk Hustlas have never done any substantial touring. May they be making the classic songwriting mistake of not writing what you know about? If HTH’s had toured, maybe they could write lyrics with more meaning and soul. These lyrics just don’t speak to me.

There are a few exceptions if you dig deep and listen hard. “After I’m Gone” is a decently-written, sweet waltz, but would be better if it wasn’t dragged down by all the other songs that reference death. “You Can’t Go Back” is probably the best written song on the album, addressing a very soulful subject. “Corporate Man” is not wholly original on it’s own, but by the time you get to the 14th track, you feel so thankful to get a breather from all the “I’m dying and I don’t give a fuck” references.

I just don’t understand dragging this album out to 15 tracks. Better to have 10 good ones, or even 9 if that’s all you can pony up. Take the three songs I mentioned, the title track, and a few others and you have a decent album. Adding dead weight just to feel like you’re giving the consumer more than they are paying for defeats the purpose by burying anything worth listening to under all the chaff. And it’s not the songwriting overall; the structures of the songs are good, and at times great. It’s the lyrics. I’m sure this album will still have lots of fans. Some albums I’ll argue till I’m blue in the face about how bad they are. This one scores high on many aspects, and so I can’t blame it for speaking to some. But I also can’t lie. It doesn’t speak to me. I need some soul and originality.

I also can’t blame anyone for saying they won’t touch the Hustlas music with a 10 foot pole, after T. Junior launched into many folks on an article meant to promote them.

We all make mistakes. Lord knows I have. If you strung all my bad articles together and paraded them in front of me, I’d probably be looking for a rope and a tree. And we all have bad days and demons and regrets; that’s why we are country music fans, and why the music speaks to us like it does. But the measure of a man is how he handles those mistakes once they are dealt. I will not judge T. Junior for losing his cool. Because God knows I have. What I’m interested in is what happens next. And then we all have ourselves to judge, if we can offer understanding and forgiveness if it is asked for, or not.

One gun up for a fun, well-produced, well-performed album.

One gun down for horrifically-cliched lyrics.

Buy South of Nashville from the Honky Tonk Hustlas