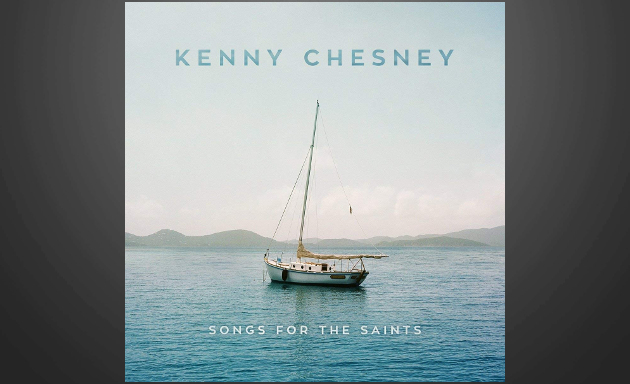 If Kenny Chesney hadn’t spent the last 20-something years of his career beating down the country music listening public with his barrage of island and beach songs, we probably would be talking about how his latest record Songs For The Saints is a striking piece of conceptualized album making, benefiting a good cause with certain proceeds going to the hurricane-ravaged island chain the record is named after, and touting the elevated songwriting and organic production that avoids many of the pratfalls of the modern mainstream sound and style. And even still, when approached with a critical ear, and a bout of amnesia about Chesney’s previous output, all of these observations arguably remain to be true.

But this is still Kenny Chesney, and he’s drawn from the well of sandy beaches and boat sails backdropped by sunsets so many times, he’s poisoned the source, and you’re sent into wave sickness simply by looking at the cover of this record that not even a good dose of Dramamine will stave off. Adding Jimmy Buffett and Ziggy Marley to the mix only enhances your painful memories of Panama Jack trinkets and Caribbean pastels set in palm tree patterns. But the truth remains patent that for what it is and who and where it’s from, Kenny Chesney’s Song For The Saints offers more buried treasure than booby traps.

The reason Kenny Chesney became country music’s cabana boy is because it worked commercially virtually every time he tried. Music Row is a copycat business, and in the case of Kenny Chesney, he kept copycatting himself. There’s something about serenading bored 47-year-old soccer mom’s with tiki torches lining their patios, who love to hold their Corona Lights up into the air during a Chesney song and drift away from their boring Midwest town to a south Florida vacation destination they time shared six years ago. It’s escapism, and one that’s fairly easy to succumb to.

None of this means that Kenney Chesney’s personal love for southern latitudes isn’t sincere. If nothing else, Songs For The Saints underscores this truth because an album like this is limited as a commercial enterprise. Even for someone like Chesney, there’s too many sea songs here for it to see enough positive reception for four hit singles on country radio. At least by mainstream standards, this really is a concept record, going to benefit a charitable cause with very personal ties to Chesney, and that promotes good songs and songwriters in a manner only Miranda Lambert has done in recent memory in the mainstream.

It’s not just that Kenny Chesney covered Texas songwriter John Baumann’s “Gulf Moon,” and “Better Boat” penned by Travis Meadows and Liz Rose featuring another worthy songwriter in Mindy Smith on harmony vocals. It’s that Chesney and long-time producer Buddy Cannon did a good job interpreting these tunes, staying true to the spirit of the original recordings, and is presenting them to a much wider audience. Despite their watery themes, “Every Heart” and even “Pirate Song” are not half bad.

There’s a few bad pits in this pineapple too, don’t misunderstand. The Jimmy Buffett collaboration is pretty meandering. The first single “Get Along” and the Ziggy Marley tune are pretty sappy. “We’re All Here” with its “…’cause we ain’t all there” refrain felt tired and worn when Aerosmith did it on “Fever” back in 1993, and then Garth Brooks had to pile on in 1995 by cutting the song himself. Don’t mistake all the positive vibes going Kenny Chesney’s way for Songs For The Saints as evidence this is a great record. It’s just a great record by mainstream and Kenny Chesney standards, despite the sand in the Vaseline that is his undying propensity to sing about beaches and bodies of water.

Kenny Chesney left Sony where he had been for 25 years to release this new record through Warner. Does this mean that for the first time in a while Kenny Chesney had a greater say so in his music, or that Sony wanted no part of Song For The Saints because they couldn’t see the commercial potential?  Either way, the record feels inspired, like a passion project, similar to Dierks Bentley’s The Mountain. It’s the record Kenny Chesney wanted to make, even if it’s not the one you particularly wanted to hear.

If adult contemporary songs about islands and beaches with only the slightest peppering of country influences isn’t your thing, that’s completely understandable. But it’s hard to fault Chesney for a record like this—like you do when he’s clearly chasing some trend, even if that trend is cutting yet another beach song. Because in this particular instance it doesn’t feel like Kenny Chesney is cutting beach songs to attain big singles. He’s doing it because he wants to, and benefiting an island chain he has deep ties to in the process.