Just like country and Americana bands from places outside of the United States, local and regional bands can be an excellent hiding place for some of the best music being released in a given year that is going regularly overlooked by the rest of media. Insulated from trends that can haunt things like the Texas scene, Los Angeles, or east Nashville, and always making music for the right reasons since their livelihoods don’t always depend on it, local and regional bands are free to do whatever they wish, which is often more interesting and entertaining than what some of the pro folks have to resort to in order to survive in a crowded creative space.

Left Arm Tan from Ft. Worth, TX fits right into that mold. For years now they have been one of the best kept secrets in Americana, tucked away in the Dallas/Ft. Worth area, touring into Oklahoma and maybe down into central Texas from time to time, and making music that deserves a national and international ear. Just like Dallas/Ft. Worth’s Eleven Hundred Springs and other outfits, they may not venture too far afield, but fans from around the country who know their name pay close attention when a new song or album is released.

Left Arm Tan won Saving Country Music’s Song of the Year in 2010 for “Wish” off their debut album Jim. Their ambitious, 18-song effort from 2016 called Lorene never got it’s proper due here or anywhere else, despite delivering some excellent songs like the driving “Daylight Redemption,” and the deep yet infectious “Break Even.” Left Arm Tan songs are always headed somewhere, or just getting back, and reflecting on life in a way that gets you both feeling and thinking. 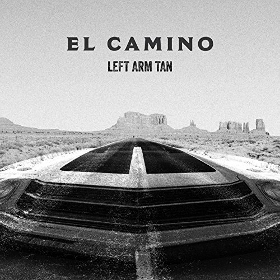 Their new album El Camino is no different. When they first released the title track in late 2017, it was immediately taken to by dedicated fans, and went straight on Saving Country Music’s Top 25 Playlist. Though Left Arm Tan isn’t exclusively a country band, “El Camino” is an excellent country road song, yet with those melodic rock and Americana sensibilities that make a Left Arm Tan effort so infectious, and far ranging in appeal.

A cover of “Looking At The World Through A Windshield” originally recorded by Del Reeves will also be welcome to country fans who like songs on the go, but a lot of variety is entailed in the nine songs of El Camino. There’s the bluesy bass beat, and deep exploration of what freedom really means in the collaboration with another local celebrity from Dallas/Ft. Worth worthy of national praise named Taylor Nicks. “No You No Me” explores the nature of relationships on the opposite end, speaking to the strength and comfort you can feel by being tied to another.

Though El Camino calls on whatever instrumentation and production any song needs to do it justice, two of the most skeleton tracks on the record in “It’s Too Late” and “I Try” are possibly some of the album’s best. Lead singers Troy Austin and Brian Lee are excellent at singing to the mood of the song. The same can be said for the composition and instrumentation chosen for each track. Not being hemmed in by any specific genre expectation, though always staying within the confines of American roots is what allows Left Arm Tan to get the most out of each song.

Don’t think just because the principals of Left Arm Tan don’t solely make a living playing music that they don’t put every ounce of effort and love into writing, crafting, and producing these songs. It’s often the little things about a Left Arm Tan tune that makes it so great, and it’s the fact that albums are the only way to connect with fans outside of their region that can result in some of the best music out there. Any true Americana music fan worth their salt knows that popularity and name recognition have nothing to do with the quality of the music. And they should also know the name of Left Arm Tan.

Left Arm Tan is Troy Austin on vocals and guitar, Daniel Hines on guitar and vocals, Brian Lee on vocals and keys, along with Tim Manders, Paul Jenkins and Mark Belding.